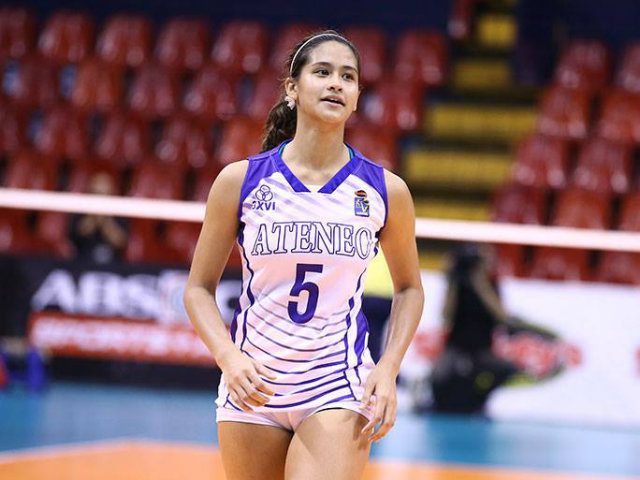 MANILA, Philippines – It’s one game. And despite the new look Ateneo Lady Eagles’ 5-set loss to the Technological Institute of the Philippines in the Shakey’s V-League on Monday, August 1, sophomore Pauline Gaston earned buzz for her breakout game where she led the team in scoring with 17 points.

Yet she was hardly exuberant about her showing. Instead, she offered that “I could play better” and “it would have been better if we got a win.”

But privately, Gaston was happy because “this was the first game where I played really long minutes.”

Previously, if one mentioned “Ponggay”, as she is fondly nicknamed, it’s because her dad Fritz was a former Ateneo and Philippine Basketball Association star while her mom, Duday, was a beauty queen during her time.

After last UAAP season, Ponggay was that bubbly and effervescent presence on the sidelines who made cameo appearances during certain parts of the game for the Lady Eagles – usually garbage time when her teammates set her up for an attack.

“She is my project,” pronounced Ateneo head coach Anusorn Bundit.

After her “starring” role yesterday, Gaston showed she is ready to be taken seriously for her volleyball and what she can contribute to her team’s cause.

For all the promise, there’s still much to learn. On several occasions during Ateneo’s match against TIP, Bundit would motion to Gaston on how to follow through on a downward motion her attacks. She’d whack the ball unmindful of its trajectory. As a result, the ball either went long and out or a Lady Engineer got a hand on the ball to send it back over the net.

She laughs. The perkiness is back.

Yet as quickly as the sun peered behind the dark clouds, Gaston turned serious. “Since it is like my first real game where I played a lot of minutes, I was trying to find my confidence. I tried to be confident. My coaches and teammates know me well. It’s also a matter of composure. I have to make everyone feel I’m confident.”

A welcome calming voice was former teammate Alyssa Valdez, who didn’t suit up during the game. On several occasions, the former 3-time UAAP Most Valuable Player could be seen talking to Gaston.

“Aly was telling me just stick to my job and what was asked of me as well as not to complicate things with my hitting. But more than anything, it was to be calm.”

With the first game in the bag, the Lady Eagles know better. Without Jhoana Maraguinot who will be out for a little over a month, and middle hitter Bea De Leon who will be out for another week or so (the team’s other middle blocker, Maddie Madayag has yet to begin training), it was up to the youngsters and the bench (and their other starters) to hold the fort.

“There is nothing to be sad about,” said Gaston. “We know what we’re capable of. And that’s why we play, to get better.” – Rappler.com