Brook to ‘shock the world’ in Golovkin title bout 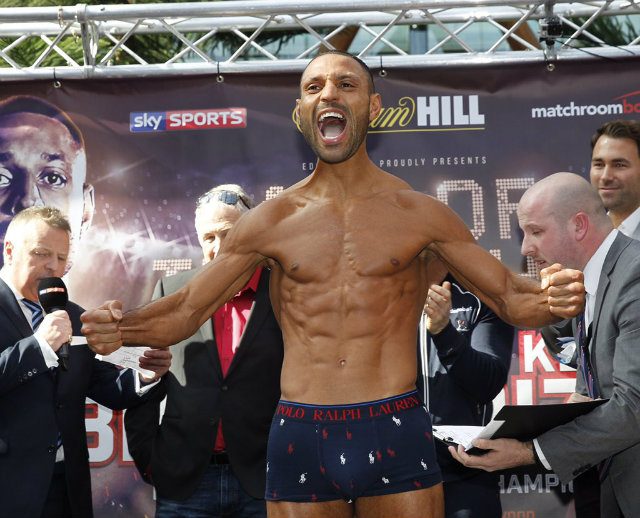 Facebook Twitter Copy URL
Copied
Kell Brook, who had been expected to defend his IBF crown against WBO champion Jessie Vargas, says he is taking on Gennady Golovkin to test his full ability

Brook, who is unbeaten in 36 bouts with 25 inside the distance, admits there will be a fear factor involved, but unlike what many believe, he is not aiming too high in taking on the 34-year-old pugilist widely regarded as the best pound for pound fighter in the sport.

“To be the best you have to beat the best and it doesn’t get any bigger than Triple-G,” said Brook using Golovkin‘s nom de guerre.

“There’s a fear factor in this, I’m going to be so sharp, so alive for that night,” added Brook, whose nickname is ‘The Special One’.

Brook, who had been expected to defend his IBF crown against WBO champion Jessie Vargas, said the reason for taking on Golovkin was he had never really been tested to his full ability and the Kazakh, who has 32 knockouts to his credit in 35 victories and only ever got taken as far as the 11th round once by British fighter Martin Murray, would provide that.

“Nobody’s ever got the best out of me, all the opponents I’ve been in with. I want to test myself to the highest I can be,” said the 30-year-old Englishman.

“I know that September 10th we’re going to see the best in me. I’m excited myself, to see what I can do.

“I always seem to do enough, and I always find a way to win, and it’s going to be the same September 10th. I’m going to shock the world.

“People are going on about weights. Mike Tyson, one of the biggest heavyweights, was fighting guys three or four stone heavier, and was an animal. You’re going to see the best of me, I’m at my natural weight, at 160lb.”

Brook, who will not be stripped of his IBF welterweight title, got the go ahead for his intimidating title challenge because of what Golovkin‘s promoter Tom Loeffler said were ‘frustrating’ negotiations with another English boxer, Chris Eubank Junior.

However, Golovkin is not taking the title defence for granted against Brook as he remarked others have moved up the weights and won.

“This is the biggest test for me,” said Golovkin

“Kell’s coming to the middleweight division.

“I understand it’s not easy, it’s the biggest test for me, absolutely.” – Rappler.com