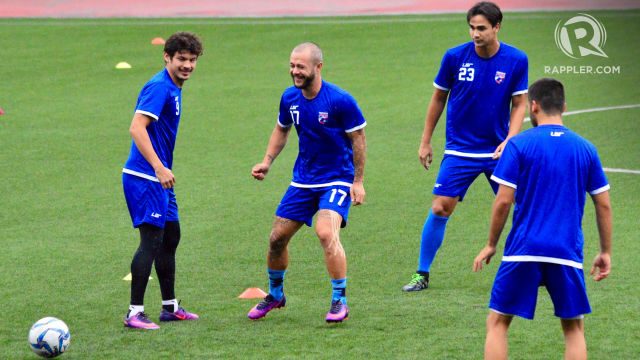 Both matches at Rizal Memorial Stadium

Philippine live streaming for both games at www.sports.abs-cbn.com/livestream/azkals

Tickets available at Ticketworld outlets and at the gate

MANILA, Philippines – The Philippines will have one of its big guns back in the saddle when it continues its preparation for the Suzuki Cup in November. Stephan Schröck is back in an Azkals jersey.

“Why shouldn’t he be selected?” said Philippines coach Thomas Dooley when asked why he has returned to the side. The 30-year old was curiously absent from the team that beat Kyrgyzstan in Bishkek last month.

Schröck has been in sizzling form for his club, Ceres, with hat tricks against Loyola and Laos plus an influential performance in a losing effort against Kaya. The versatile player has 4 goals for the Azkals in 22 appearances for the Philippines.

If Schröck plays in the AFF Suzuki Cup in November it will be his first time to suit up for the Philippines in the biennial competition which does not take place in FIFA international dates, hence his unavailability while he played professionally in Germany. Now that he is with Ceres and it’s the off-season, he is good to go.

Also present at training on Wednesday is Mike Ott, the younger brother of Manny, who is also in the roster. The younger Ott is a second striker who plays for Nurnberg II in the Regionalliga Bayern, a league that is part of the fourth tier of German football.

On Wednesday Ott scored a gorgeous top corner goal from near the edge of the box in training. He was supposed to go to Kyrgyzstan but that trip did not push through. It’s not yet known if the 21-year old will be released by Nurnberg II for the Suzuki Cup.

Expect the younger Ott to see some action on Friday or Monday, perhaps off the bench.

Daisuke Sato did not make the trip from Romania since he is nursing injuries to his achilles tendon as well as a hamstring problem. It’s not likely that Sato’s employer, CSMS Iasi, will allow him to play in the Suzuki so this is not a problem for Dooley.

Simone Rota, who is on the opposite side of the defense from Sato, is still recovering from partial tears in his knee ligaments that could keep him out of the Suzuki Cup. He won’t be participating in either of these two friendlies.

Apart from minor nicks and pains, the rest of the team is fit. Thomas Dooley says that he has yet to decide on who will supplant Sato at left back. He says he has a few options in mind but won’t make a decision until before the game. Schröck, a quintessential utility player, could very well be an option, especially if he is permitted to make forays into opposing territory.

Three goalies were at the training on Wednesday, Roland Müller, Patrick Deyto, and Nick O’Donnell. Dooley says that both Müller and Deyto will likely see action during the two matches. He has yet to settle on a first choice.

Deyto has started most of the games for Global as they wrapped up the UFL League last weekend. Müller has not played a single game since he joined Ceres after the first round. He was originally supposed join the roster during a transfer window that was scrapped at the last moment.

Dooley thus has a dilemma: go with Deyto who has had more matches of late, or go to Müller, who has been idle for long but has played at a higher level in Europe. O’Donnell, Deyto’s backup in Global, has also had little playing time, although he did shine in the 2-0 loss to Perth Glory in Vigan a few months back.

Neil Etheridge has already made a press release ruling him out of the Suzuki Cup because of the FIFA dates clash, so its understandable that he is not around for these matches. The Walsall man is most likely the Philippines’ top choice when the next round of AFC Asian Cup qualifying begins next year.

John Burridge, Global’s new coach and a veteran of the English top tier, was at training. The former goalkeeper says that Deyto could fit right in at League One, the level where Etheridge competes at.

Dooley also has another option at centerback. Luke Woodland is in town and looked sharp in training. Woodland, now with League One outfit Oldham, is an option at centerback. The 21-year old can play both in defense and as a defensive midfielder. His size and height make him an ideal successor to Rob Gier and Juani Guirado. Dooley will likely choose between him and Dennis Villanueva to partner Amani Aguinaldo in the heart of the Philippine defense.

The clubless Iain Ramsay will be in the mix. The left-sided attacking player is still not sure to be available for Suzuki Cup. He has parted ways with Tractor Sazi in the Iran top tier and is currently weighing offers with other clubs.

While no doubt there will be interest from Filipino clubs set to join the national league next year, Ramsay says he may also play back home in Australia, where his wife and young child are based. The Suzuki Cup takes place as the A-League is very much in swing, making it unlikely he will be released.

Javi Patiño won’t be playing in any of the tune up matches for the Azkals but he is committed to the Suzuki Cup proper, which will happen after the end of the Chinese Super League.

OJ Porteria is in the lineup. The former Kaya player says he will be available for the Suzuki then he is open to other possibilities. The Virginian said he trained with MLS team DC United while in the states recently and he says he may join some scouting combines in the US, where MLS and European scouts examine players.

These two games were originally scheduled to kick off at 3:30 pm, but with the new lighting at Rizal memorial now on stream, they have been pushed back to a more fan-friendly 8:00 pm. The new lights were partly turned on for the end of Wednesday’s training.

There will be live TV coverage on Friday but it appears that live volleyball coverage commitments in ABS-CBN could push back  the telecast of the DPR game. But a live streaming for both games will be available, albeit only for the Philippines.

Dooley called time on the training session after just over an hour. Perhaps he was eager to give some of his fatigued players a rest.

DPR Korea are at 118th in the world and they have a new coach in Jørn Andersen. The Norwegian-born German citizen was a classmate of Dooley’s in a coaching licensing course. Dooley says that this DPR team has been training continuously as a team since the end of the World Cup qualifying campaign in March. For sure they will be out to avenge the 3-2 loss to the Philippines on this same ground. In a previous qualifier the Azkals held the Koreans to a 0-0 standoff in Pyongyang.

But first the focus is on Bahrain on Friday. Another tough opponent to keep the Azkals sharp for the Suzuki Cup.