DPR Korea 3, Azkals 1 Postgame: Lots of work to be done 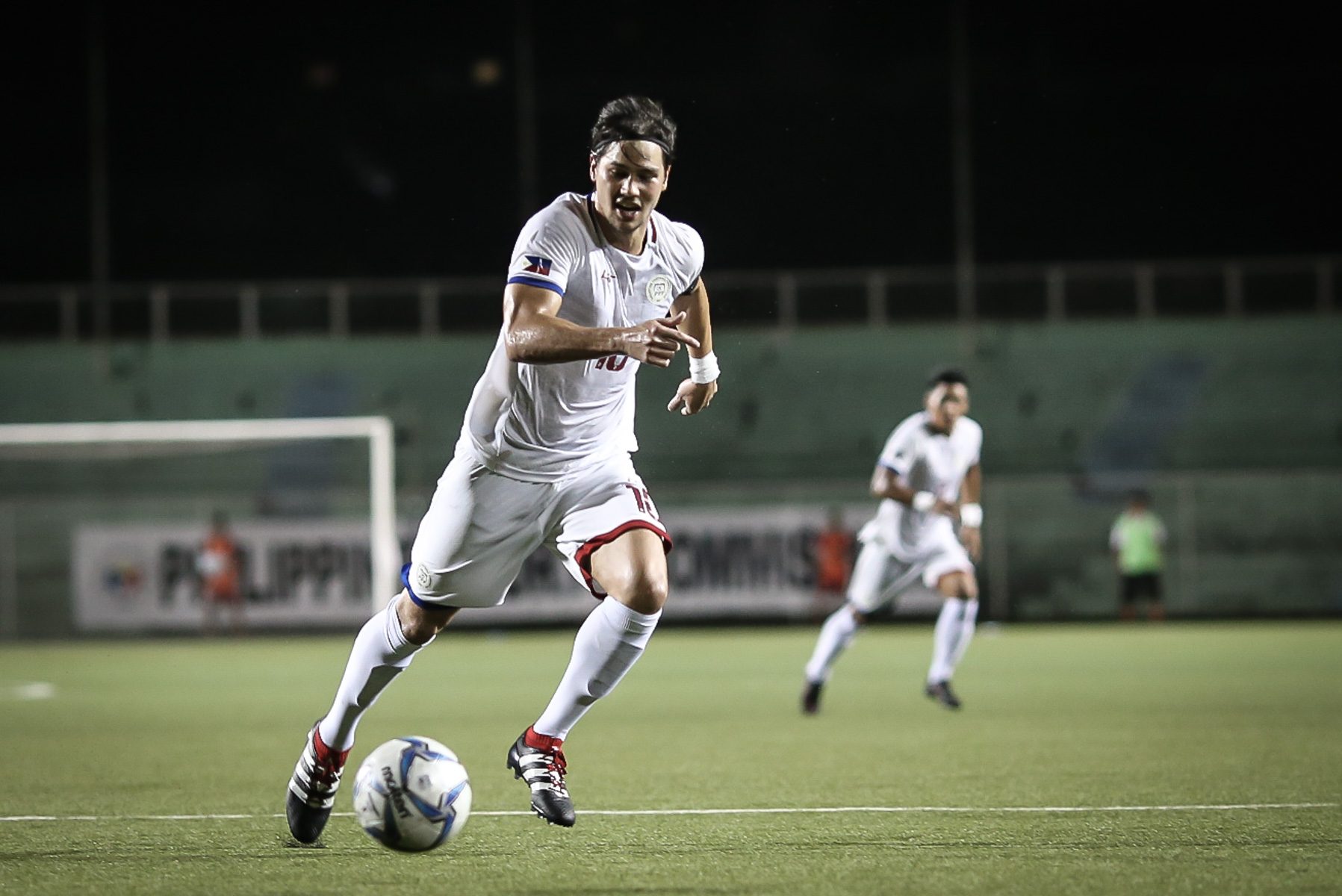 Facebook Twitter Copy URL
Copied
The Philippines has slumped to defeat again at home. There are plenty of talking points.

My thoughts on out-of-position players. Much has been said about coach Thomas Dooley’s squad selection and positioning of players.

For the second straight game we had an unchanged back 4. Three of them were out of position. Kenshiro Daniels is not a natural right back, Luke Woodland is reportedly more of a holding mid than a center back, and Martin Steuble is customarily a wide midfielder and not a wing back.

Roland Muller the goalkeeper on Monday hadn’t been in a competitive game in months, and in front of the defensive line was Phil Younghusband, who many think is miscast as a defensive midfielder.

I will sort of take the side of Thomas Dooley on this one. It’s easy to say that we should be selecting players who play their positions regularly. That we should get CBs to play CB and left backs to play left back, etc. But the way I see it, perhaps Dooley is simply not satisfied with the quality of the specialist players available to him. He’d rather play players out of position to get better results. In other words, yes, we could put in the specialist players in the lineup, but the result might be just as bad or even worse. It’s impossible to really tell.

Dooley is making a judgment call, and to a certain extent we must trust his vast experience in these matters.

What I might suggest is looking at a few players for the Suzuki Cup. If Carlie De Murga is fit, I’d try and rope him in. He is an experienced bloke who really is capable of playing quite a few positions. Carlie was at the game in street clothes watching on Monday. De Murga has had knee issues in the past, though.

If we need a holding midfielder maybe Jason De Jong can be lured out of his premature international retirement. De Jong plays for Loyola.

For wingbacks, maybe Dooley can even kick the tires on players like Jerry Barbaso of Global and Baks Soriano of Ceres. At least those two have reasonable international speed and fitness. Ditto for Kaya’s Shirmar Felongco, who is hellaciously quick. At this level, speed is one of the main prerequisites.

But I am in agreement with most in saying that Phil Younghusband has to be nudged upfield. It’s true that he can unspool those gorgeous diagonal balls with regularity. But he is not able to clog the midfield. That has never been part of his skill set. There were gaping holes in the center of the park on numerous occasions on Monday. A straight swap in the formation between Kevin Ingreso and Phil looks about right.

Height is might. It’s a common thought among Filipinos who are not knowledgeable about the game that we can excel in football because height is not important. This notion needs to be disabused.

Having tall players is a massive boost in football. A taller goalie has more reach to palm away angled shots. A taller striker can outjump defenders on high balls. Taller defenders can neutralize this. Taller players usually have longer strides and thus are often speedier. A taller player is often a stronger one as well. So he can shoulder-to-shoulder ball carriers with greater force.

Sure, you can have some small players on the field, but they better be technically excellent. The diminutive Paolo Bugas had another stellar outing with two or three superb piercing forward passes. Two or three undersized players on an eleven is about maximum, I believe.

DPR Korea had some massive guys. Centerback Jang Kuk Chol looked at least 6’4”. Goal scorer Pak Kwang Ryong appeared to be about 6’1” and was a chiseled specimen. Many of the DPR Korea players towered over our players, even Amani Aguinaldo.

One of Philippine football’s biggest issues is the size of its players. You can see it in NCAA and UAAP football. So many gifted players who are hampered by small stature, likely from growing up in poor provinces where good nutrition is hard to come by.

DPR Korea, like Bahrain before them, and the Perth Glory, were all teams blessed with height. It must be one of the reasons why the Azkals lost matches to all of those teams. And it’s important to note that we conceded headed goals against both Bahrain and North Korea.

I’d love to see centers of footballing excellence sprouting in the provinces that had a focus on nutrition. That way talented young footballers from underprivileged backgrounds could, from a very early age, get the right fuel in the tanks to grow up to their maximum height. If we can’t have the tallest team now, let’s try and make them tall for the future.

Are we playing too many games against too many tough teams? I would tend to think so. The Azkals need to toughen up for the Suzuki Cup, that much is true. But we have now faced Kyrgyzstan, Perth Glory, Bahrain and DPR Korea in friendlies in recent times. Apart from the 2-1 win we stole in Bishkek against Kyrgyztan, we have lost all of those matches, three at home, counting the defeat to Perth in Vigan.

I believe we need to balance the need for strong opponents with a desire for winnable matches against teams close to our level. This is especially true of home matches. Our fans need to see our team scoring goals and winning. That will spur the enthusiasm to draw in more fans and sponsors.

Our players also need to get that winning feeling to jack up their confidence. Perhaps maybe one of these friendlies could have been against a team from ASEAN. Tough, but more beatable. But in fairness to team management, getting opponents for friendlies is often a difficult dance. You often end up with the teams who will agree, and it isn’t always what you’re looking for.

A word on friendlies and FIFA dates. This FIFA international window runs from October 3, a Monday, to October 11, also a Monday. It seems that FIFA wants to make sure that only one weekend is swallowed up by the dates, for minimum impact on club play.

I understand that you are only allowed to play two matches during a FIFA window. But a country can opt to play just one game, or none at all. That’s why FIFA international games are almost always on weekdays, usually Tuesdays and Thursdays. That way players can make the weekend club matches before and after the windows.

It’s hard to get a crowd out to watch matches on weeknights in the Philippines, especially with the traffic situation. I think we need to have more home matches on Saturdays and Sundays.

Do you know when was the last time we had an official home Azkals match on a Saturday or Sunday? Saturday, September 6, 2014, against Myanmar in the Peace Cup final, a 3-2 loss.

Next year’s AFC Asian Cup qualifiers will all likely take place on Tuesdays and Thursdays. But moving forward, I suggest the team management endeavor for more home friendly matches on Saturdays and Sundays. It just makes it a whole lot easier for fans to come to games. In this window we had matches on a Friday and a Monday. Friday is okay because there’s no work or school the next day, but the traffic is horrible. Monday is tough.

If we have Saturday and Sunday matches on FIFA dates, that means we will likely only use up one of the two available slots in the window. For me that is an acceptable sacrifice for the fans.

Props to the team for acknowledging the fans. The most heartwarming moment on Monday came after the final whistle. In a pouring rain, the Azkals trooped over to the bleachers to say thanks to the fans who braved the deluge to cheer them on. Then they walked over to the Ultras to do the same. I’m glad the team did that. It was a nice gesture.

I hope more fans reciprocate the love on November 9 against Kyrgyzstan, our next friendly. – Rappler.com