Oct 25, 2016 5:27 PM PHT
Bob Guerrero
Facebook Twitter Copy URL
Copied
It's making way for the Philippines National League, but the UFL can be proud of what it's achieved 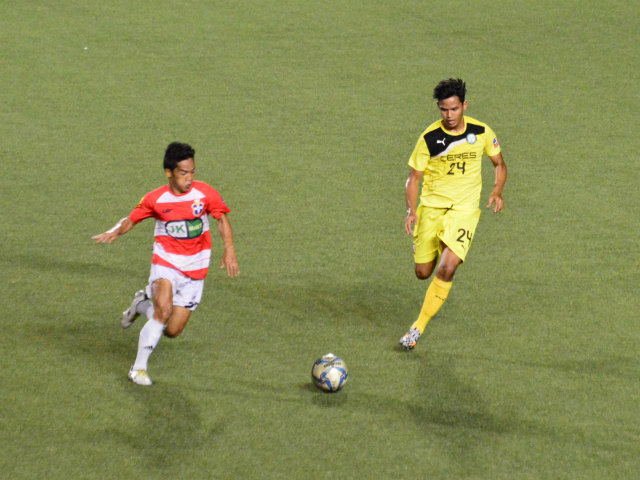 At shortly past 9:30 pm last Sunday night FIFA referee Steve Supresencia blew air through his whistle and pointed both his hands towards the center circle. The Ilonggo official had signaled the end of the final match of the 2016 United Football League season, with JP Voltes winning 1-0 over Ceres La Salle. The result means Ceres still finishes second in the table behind champs Global.

The busmen finished the game with just 8 outfield players after both Stephan Schrock and Manny Ott were sent off. But it’s not clear if either of the two Azkals will ever be serving a suspension. Supresencia didn’t just end the match with his whistle, he might have brought down the curtains on an era of Philippine football as well. This could very well go down as the last UFL game ever.

For the past half-decade the UFL has served as the de facto top tier of football in the country, despite the fact that all but one team, Ceres, are based in Manila. If all goes to plan, most if not all, of the top teams in the UFL will comprise the Philippines Football League, a community-based competition with teams scattered all over the archipelago. That league is planned to bow in March of 2017.

(Full disclosure: the author has previously done paid work for the league, as a videographer, photographer, and event host/emcee.)

History will likely judge the UFL’s legacy as generally positive but with some missed opportunities as well.

The league gave hundreds of players an opportunity to play top-level football against players from around the world. There had been previous attempts at high-level football leagues here like the Metro Manila Premier League in the 90s and the P-League after that, but, without having the benefit of being in the scene then, the UFL seems to have taken it a notch higher.

True, an influx of foreign players and overseas-born Filipinos helped raise the level of play. But the homegrown footballers also improved in absolute terms. My favorite example of this came from the 2015 season, when Green Archers United, starting 9 homegrown players, defeated Kaya 2-0, even though Kaya only played two homegrown players off the bench. When players from here are constantly faced with players abroad, they invariably level up.

One of the biggest feathers in the UFL’s cap was steeling Filipino club teams for success in international club competitions. This was something unprecedented. UFL teams regularly competed in the Singapore Cup, with Global, Loyola, and Ceres all reaching the semifinal stage at one point over the last few years.

Filipino clubs have also found success in the AFC Cup. In 2015 Global became the first Pinoy side in that competition, just narrowly missing out on a playoff berth. This year Kaya and Ceres both made it out of their groups into the knockout stage.

But perhaps the most important contribution of the UFL is in helping the Azkals succeed. The past 5 years have seen the Philippines reach two Suzuki Cup semifinals, finish third in one AFC Challenge Cup and then second in another. We have also gone deeper into FIFA World Cup qualifying than ever before. None of this would have been possible without a league like the UFL, since the majority of our national players plied their trade there. The league kept our guys sharp, all-season long.

It wasn’t just in senior football where the UFL made a difference. Their youth competitions also gave young footballers valuable playing time to hone their craft. It’s generally accepted that a young footballer needs 30-40 matches a year to reach his or her full potential. The UFL gave kids a boost in that respect.

The UFL can hold their heads up high with these accomplishments. But there are also many instances of the league falling short.

While attendance looked promising during the two years after the Azkal’s Miracle Run of 2010, interest in the league has since waned. The league and the clubs were simply unable to whip up the fan base needed to sustain momentum.

UFL matches used to be live on TV5’s channels, but for the past season viewers had to be content with next-day delay telecasts.

All UFL matches are now in Rizal Memorial. It has the best pitch in town but the place really isn’t that accessible for many fans. In my opinion the University of Makati, with it’s more central location, was the best spot for the league. Unfortunately its poor natural grass field made for frustrating football. The league also played in McKinley Hill Stadium for a spell, but that facility’s undersized pitch and awkward location for commuters made it difficult for fans.

As far as I could tell, evidence of a coherent, consistent, strategic, plan for marketing the league in recent years has been scant.

Because of these struggles, the league has contracted drastically over the past two seasons. The UFL once had two divisions with 10 teams each. They finished the 2016 season with 9 active teams in one tier. The economics of keeping together a team without a steady stream of revenue has been too much for many owners. The boneyard of UFL teams that have exited stage left is filled with names like Pachanga Diliman, Socceroo, Cimarron, General Trias, Queen City United, Dolphins, and many others. The three military clubs, Army, Air Force, and Navy, once the backbone of the national teams, all departed for a variety of reasons.

In recent times many of the minnows of the UFL struggled to cope with the big clubs, and many matches were blowouts. It’s hard to get fans interested in a league where the outcome is decided even before the opening whistle.

As we move into uncharted waters in Filipino club football, we can acknowledge the foundation laid by the UFL but also learn from its failures. We need to build better bonds with communities and fans. We need to market the game more wisely. We need to find a path to sustainability so investors and sponsors can once again take a punt on the game.

Is the UFL story over?

Not necessarily. The Philippines Football League is far from a done deal. There are rigorous club licensing guidelines that must be met for teams wanting to join. They only have until December 30 to submit and wait for approval. If fewer than six teams can pass muster, the league will not push through. There is no title sponsor announced, and no broadcaster either, just five months away from the planned launch. The franchise fee has also yet to be revealed.

The UFL could be a back-up plan in case the national league not pull through. The UFL is basically on the bench, wearing a neon-pink bib, and waiting for a tap on the shoulder from the gaffer. If needed, it will sprint to the fourth official with paper in hand, ready to join the fray anew should plans for a national league stumble. And even if the national league does push through, the UFL could survive as a Manila-based second-tier.

But what is sure is that the UFL left us in the football community with an avalanche of lasting memories.

Stallion’s Ansing Gustilo lofting one over Global’s Paolo Pascual from the half-line in 2011. Loyola coming back from 3-0 down to beat Kaya in the Cup semis. Air Force stunning Loyola in the Cup final later that year, thanks to Yanti Barsales’ dagger breakaway strike. Global and Loyola combining for seven goals a year later, and then Global winning the title by a hair over Kaya.

I recall the joy of of seeing Air Force draw Loyola from two goals down with two late strikes that season, then get relegated the next year. Loyola won the Cup in 2013 in a heart-stopping 3-2 final win over Pachanga, as Stallion took the league. That was also the year when an Army player received a 6-month suspension for kicking an assistant referee.

Last year was Ceres’ year in the league, but Kaya stunned Ceres in the Cup final in an epic shootout with Nick O’Donnell making a bunch of saves. But my favorite moment was Green Archers’ improbable 9-5 victory over Pachanga Diliman. That was also the time when Manila Jeepney schocked Ceres.

The UFL may have not had a big fan base, but those of us who did go to games knew it was a good show week-in, week-out. If we never see the UFL again, it will live on in the sepia-tinged recesses of our minds.

The UFL was an important stepping stone in the development of football in our country. Let’s hope for something bigger and better as the Philippines Football League arrives. – Rappler.com