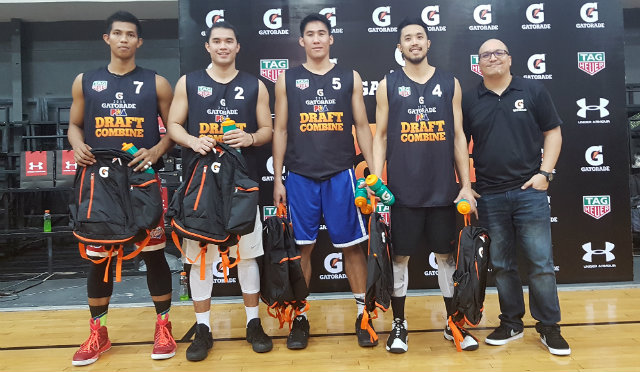 MANILA, Philippines – Fil-Am swingman Ryan Arambulo as well as national team and Far Eastern University standout Mac Belo topped a field of 55 aspirants in the skills test on day 1 of the 2016 PBA Rookie Draft combine on Wednesday, October 26, at the Gatorade Hoops Gym in Mandaluyong.

The 26-year-old Arambulo out of California State Fullerton was in the top 5 of all 6 tests and drills designed to give coaches an idea of each player’s physical capabilities.

Arambulo, who stands 6-foot-2 and played in the D-League with Wangs and AMA, showcased his speed when he topped the shuttle run with a time of 47.22 seconds and the 3/4 court sprint with a 2.82 second-clip.

“This combine I’ve been waiting for this for almost 4 years,” said Arambulo, who was second the standing vertical leap (3.31 in) and third in the maximum vertical leap test (39.0 in).

“All that hard work, dedication, patience, it all plays a part. I’m just so blessed I happened to perform well today.”

Arambulo was a former trackster back in college and played various Filipino basketball leagues. He was eventually scouted by a PBA agent and told him about a potential opportunity to play in the Philippines.

Meanwhile, Gilas cadet Belo somehow made an even stronger case for himself as the prospective top draft pick this year as he showcased his athletic ability as this pool’s highest leaper.

The 6-foot-4 Belo, a former UAAP Finals MVP, recorded the best height in the standing vertical leap (33.7 in) and the maximum vertical leap (43.5 in).

His versatility, athleticism, on top of his high basketball IQ made him a perennial matchup problem for coaches back in the UAAP, and it’s expected to land him the first overall pick in the draft.

Belo, along with 11 others, will be part of the special Gilas draft to take place before the regular draft on Sunday, October 30 at Robinsons Ermita.

The other top performers from day 1 of the combine include Jammer Jamito with his 11.31-second best finish in the lane agility drill, as well as Raffy Banal, who had an 11.3-meter best in the maximum medicine ball throw.

Rookie applicants will get to showcase more of how they play with scrimmages set for day 2 of the combine on Thursday, October 27.  – Rappler.com