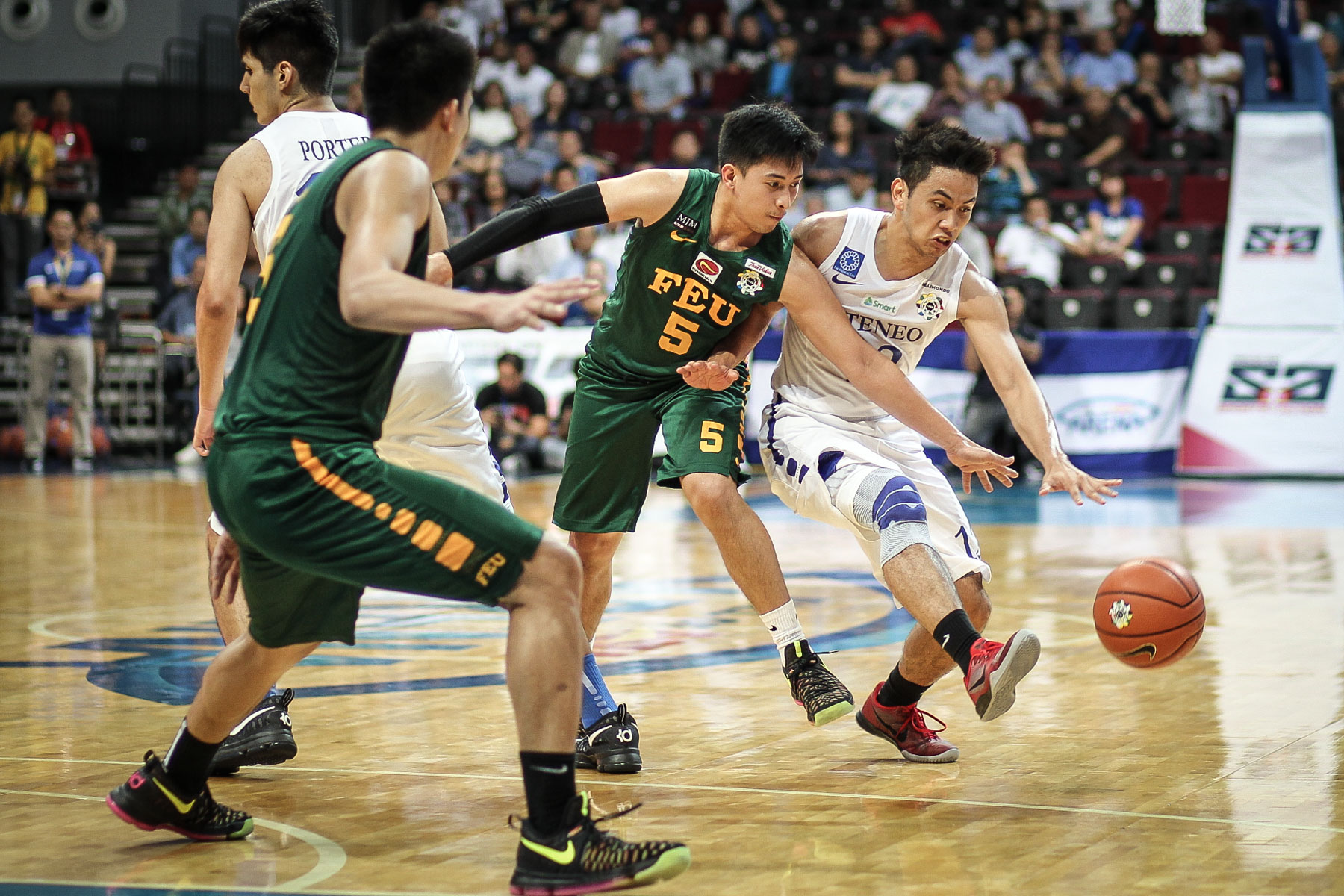 MANILA, Philippines – The FEU Tamaraws’ title defense hangs in the balance as they face the Ateneo Blue Eagles in the Final Four round of the UAAP Season 79 men’s basketball tournament on Saturday, November 26.

As the third seed, the Tamaraws need to defeat the second-seed Blue Eagles twice to make the tournament finals a third straight season, while Ateneo will only have to win once to make the championship round for the first time since 2012.

With the school’s biggest game of the season less than a week away, FEU athletic director Mark Molina is hoping there will be more consistency from the UAAP referees as the stakes increase.

Molina, who has 1,527 followers on Twitter, posted an image last week of DLSU veteran Jeron Teng hitting FEU guard Ron Dennison on the arm on a jump shot attempt with the caption “One minute to go. Game tied. #calltheobvious #UAAPSeason79.”

FEU lost that game to DLSU despite leading for the majority of the contest. Had the Tamaraws won that match, they’d be tied with Ateneo in the loss column with 4 defeats each, and instead of facing a twice-to-beat disadvantage, would play the Blue Eagles in a virtual best-of-3 for a ticket to the finals.

“Before I tweeted, I sent it to (UAAP) Commissioner Rebo [Saguisag]. Tied game, one minute to go, that affected the game. If they called the foul, we would have been up two, a minute left,” Molina told Rappler in an exclusive interview.

“I’m not saying there’s something fishy, but the consistency of the officiating is what we’re after.”

Using the hashtag “#calltheobvious” is in reference to the statement made by DLSU big man Ben Mbala after the win versus FEU, when he told Rappler he hopes the UAAP officials will “at least call the obvious fouls” after looking visibly frustrated with the officiating throughout the match.

Molina also tweeted a link to the article above with the caption “I completely agree with Ben Mbala as DLSU was called for only 14 fouls yesterday.”

“I thought last year was better in terms of being consistent every game, and one of the things Rebo mentioned, the referees who officiated last year also officiated in the NCAA. So they had more runs. There was more practice,” said Molina.

Another questionable event concerning the referees took place during halftime of the latest FEU-DLSU game, when the officials apparently gave the impression that they would call the contest differently in the second half than they did during the first two quarters.

“One of the referees said, ‘Coach, pag hindin na namin kinaya, tatawagin na namin,’” DLSU head coach Aldin Ayo said after that game about what one of the refs was trying to say, something which clearly frustrated him. The first year La Salle coach also hinted at unfair officiating when it comes to Mbala.

(Coach, if we can’t take it anymore, we’re going to call it.)

Even FEU head coach Nash Racela was unhappy with the UAAP officials during the game, saying that he wanted the league to do something about their inconsistency.

“One of the things that I found strange in the last game against La Salle was the referees calling the coaches at halftime and telling them, ‘We will call these in the second half.’ I was not there, but you cannot change something in the middle of the game,” Molina told Rappler.

“I knew Coach Ayo was upset also about that. We were upset about it as well. We all want consistency. You’re teaching the players to play one way. If it changes suddenly from the next game, it’s tough to adjust.”

FEU enters the Final Four having lost 3 of its last 4 games, including a lopsided defeat to the Blue Eagles. Ateneo also defeated the Tamaraws in their first round matchup.

When asked if consistency is all Molina hopes from the UAAP referees in the upcoming matchup, he responded: