Nov 22, 2016 11:10 PM PHT
Jane Bracher
Facebook Twitter Copy URL
Copied
The NU Bulldogs big man will be missed on and off the court 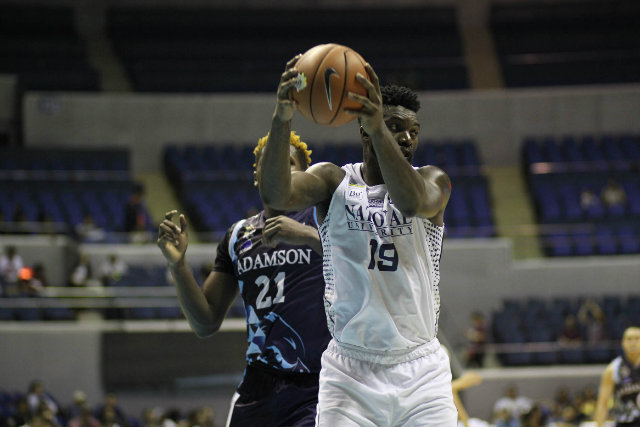 MANILA, Philippines – It wasn’t the ending he envisioned, but Alfred Aroga is walking away from his UAAP career with a big toothy smile, grateful, satisfied, and without any regrets.

The National University import played his last UAAP game on Sunday, November 13, a 77-53 blowout at the hands of Final Four-bound Adamson University.

Aroga, 24, finished with just 9 points on 2-of-7 shooting along with 12 rebounds, 2 assists, and 3 blocks in what was a listless showing to cap off a forgettable season for the Bulldogs.

“I just want to think about all the good memories I had here in the Philippines so I’m really thankful to the Philippines [for allowing] me to come to the country,” Aroga said, beaming.

“Plus I want to thank the UAAP because even though they gave me a hard time to play at least they let me play. Through the Philippines and the UAAP I had a lot of opportunities.”

Back in 2013, Aroga had eligibility issues as the league ruled he failed to meet the two-year residency requirement for foreign players. It proved to be a tough year for Aroga as news of his father’s death reached him a few days later. (READ: Aroga dedicates UAAP title, MVP to late father)

The 6-foot-7 center was eventually cleared to play in 2014 and, as he picked himself up again, became pivotal in the Bulldogs’ run to the 2014 title, the school’s first in 60 years.

“I left a really good legacy because actually I don’t think about me. ‘Cause what I learned here in the Philippines and in life is that for you to succeed faster you need to help your surroundings,” shared Aroga, who averaged 10.3 points and 10.1 rebounds this season.

“So I helped a lot of guys to succeed – Glenn (Khobuntin), Troy (Rosario), I’m happy to see them where they are today. But I’m so sad this year I couldn’t help these kids to get there.”

Graduation is in the immediate future for Aroga as he is set to receive a degree in Sports Management on November 28. He looks forward to possibly getting a master in Sports Psychology and eventually a doctorate because, in his words, “you can’t just play basketball your whole life.”

He declined to share where he will go next – though he said he’s neither staying in Manila nor going back home to Cameroon just yet – but he wants to become a motivational speaker and draw from his personal experiences to inspire other people.

“Because it’s in my DNA,” the Season 77 Finals MVP answered when asked of his choice of career. “I don’t need to have any effort to motivate. In my surroundings you see a lot of people gonna come to me, I’m really a good motivator. I remember the year we won a championship. If we go to the court I have to talk. I wasn’t the captain but I had to say something.”

“With all the things I went through: deportation from the Philippines and you have to come back here, and your father dies. All these things,” he further explained.
“A normal man is just gonna give up. So it’s up to you to bury your dad and his legacy or you step up and fight. That’s it.”

Aroga sees a bright future for NU even though he won’t be a part of it anymore.

“God didn’t want Moses to reach the Promised Land even though he was the leader of a certain group,” he said.

After their final game, as the Bulldogs huddled on the court to absorb the early end to their season, NU fans paid tribute to Aroga with a sign that read: “Thank you for everything Alfred Aroga! #silentassassin.”

Aroga’s legacy at NU is certainly secure – he will be missed on the court and off it as a colorful and humble figure. But there is one thing Aroga will miss most about the UAAP.