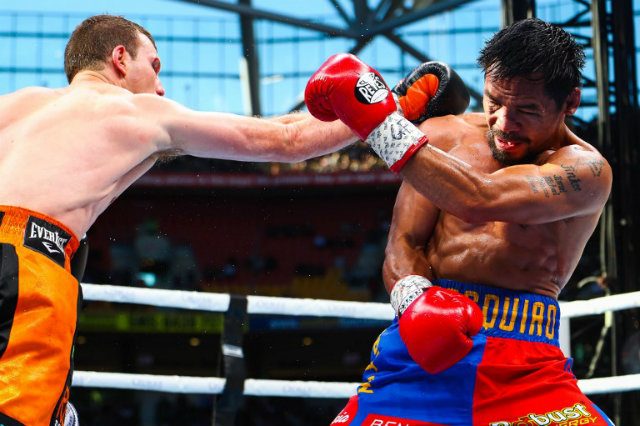 In a statement, Presidential Spokesperson Ernie Abella reminded Filipinos of the many victories Pacquiao brought to the Philippines throughout his prizefighting career.

(The Palace thanks the unending support of Filipinos for Manny Pacquiao in times of victory and in defeat.)

“Manny Pacquiao’s loss in Brisbane would not diminish the honors he bestowed to the people and to the flag.”

Pacquiao lost via unanimous decision to the Australian with scores of 117-111 and 115-113, and effectively relinquished his WBO welterweight belt to Horn.

The stunning and bloody upset, which drew flak online, came as Pacquiao, 38, entered the fight as the overwhelming favorite to win anew against the much younger 29-year-old Horn.

Malacañang reiterated that “nothing will change” when it comes to the legacy of Pacquiao, who has remained determined to continue his boxing career amid his duties as a senator.

‘In victory and in defeat’

Meanwhile, Pacquiao’s colleages in the Senate have also expressed their support despite this setback.

“Taas-noo lang (Hold your head high) Sen. Manny. You fought a good fight. Win or lose, Filipinos will always be proud of you, of what you have done for the sports, and for the whole country,” Senator Sonny Angara said in a statement.

“In victory and in defeat, we have celebrated and cried with you. We are proud of you Sen. Pacquiao!”

Senator Nancy Binay, on the other hand, commended Pacquiao for toughing it out against a much younger opponent.

(Manny showed he can still keep up inside the ring with younger fighters and so we continue to believe in his abilities.)

“Manny showed us that we remain graceful in defeat, never losing hope, and striving to get back up on our feet against adversity,” she added.

“We are still and will always be proud of you for bringing so much pride and honor to all Filipinos around the world. You have exemplified strength and courage throughout the battle, truly one of the greatest fighters of this generation,” he said.

Senator Cynthia Villar lauded Pacquiao and reiterated that his greatness will be difficult to match.

“Despite his loss, the fact remains that Pacquiao’s feat as the greatest boxer of our time will be very hard to replicate. In the heart of many Filipinos, Pacquiao is a true champion who has given so much honor and pride to Filipinos around the world,” she said in a statement.

“His passion for his craft will continue to inspire our youth to aspire for greater heights despite the odds.”

“Looking at all the stats, Manny connected twice as more punches compared to Horn. Don’t understand how he lost this one,” he wrote.

Looking at all the stats, Manny connected twice as more punches compared to Horn. Don't understand how he lost this one.

Vice President Leni Robredo also joined in, saying the strength of the Filipino people in times of crisis should also serve as an inspiration to Pacquiao after his defeat.

“Manny’s loss today will be a disappointment to many Filipinos, particularly those loyal fans who have cheered him on and have been inspired by him throughout his career. But every loss is also an opportunity to get back up – this has been the story of Manny Pacquiao, as it has also been the story of millions of other Filipinos,” she said.

“Battered by poverty, by calamity, by prejudice, so many of our brothers and sisters have been knocked down, but continue to muster the will to get back up. They have always been a source of strength and inspiration to me, and in this hour of disappointment, I hope they will also be for Manny.” – Rappler.com