Oct 13, 2017 1:56 PM PHT
Ryan Songalia
Facebook Twitter Copy URL
Copied
It took two tries for Edward Heno to win the OPBF junior flyweight title, but he lost it before he even had a chance to defend the belt 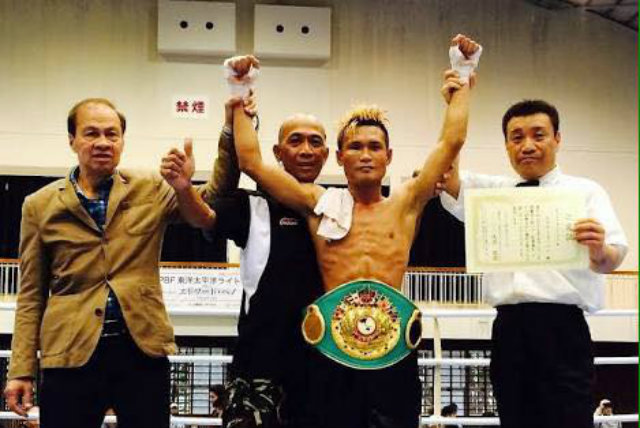 MANILA, Philippines – It took two tries for Edward Heno to bring the Oriental and Pacific Boxing Federation (OPBF) junior flyweight title back to the Philippines. And he lost it without ever stepping into the ring as champion.

The undefeated Heno (11-0-5, 5 knockouts) of Baguio City, Philippines, knocked out Seita Ogido in 7 rounds on September 10 in Japan, settling a previous draw in May to win the vacant title. A month later, Heno was stripped and dropped down the rankings to No. 4.

Heno’s manager, Anson Tiu Co, says this was because Heno was not able to fight at the OPBF convention show on November 10 in Puerto Princesa, Palawan. The OPBF rules state that a new champion who acquires the vacant title must defend within 90 days, but the OPBF wanted it a month sooner.

Tiu Co explained that Heno’s son had been hospitalized – and remains confined – so the boxer would not be able to focus on his training properly.

“My question is, why is he insisting that the champion should fight less than 60 days?” says Tiu Co. “He trained for a 12-round title fight. And even if the fight didn’t last 12 rounds, the boxer should be given ample time to recover and train again.

“Why can’t the fight be in December? Because Heno would have less than two months to get ready.”

Tiu Co is referring to Ramon Guanzon, OPBF Secretary General and former Games and Amusements Board chairman. Guanzon of Bacolod City said that both Heno and Ogido had been informed through their sanction letter that their title fight was under the condition that the winner fights at the OPBF convention.

“Both camps agreed to this condition,” Guanzon tells Rappler in an email. Guanzon says that Tiu Co initially said Heno’s hand was injured, and when asked to submit a medical certificate to support the reason, the document referred to the condition of Heno’s son.

“What he told us [former GAB boxing chief Dr Nasser Cruz was present] was that Heno was injured and was asking for a postponement and not because his son is sick which is never a valid excuse for postponement of a title match,” says Guanzon.

“In my 60 years in boxing, I have never encountered a postponement based not on the injury to the boxer but because of sickness of another person,” he adds.

Tiu Co counters that he had only mentioned in passing that Heno’s hand was swollen when they met over lunch, and that the “main reason was that his son got sick.” He also states that he was never informed beforehand of the OPBF’s stipulation, and that he dealt with the OPBF only through a conduit, Benguet-based promoter Brico Santig. Tiu Co maintains that he was only informed of the obligation via text message from Guanzon on September 12, or two days after Heno won the title.

“Then after we agreed on the purse, I received the bout contract through email from Brico. I never received any email from the OPBF itself,” Tiu Co says. Reached for comment, Santig referred all requests for comment back to Guanzon.

The OPBF is one of the more prestigious regional title belts in the world, and has been in existence since 1954. It is affiliated with the World Boxing Council (WBC), and typically confers to its titleholders a top 15 world ranking. Filipino greats like Flash Elorde, Manny Pacquiao, and Erbito Salavarria all used the title as a springboard to world title success.

“A distinguished organization run by a compatriot and still being treated so poorly just leaves a bad taste in the mouth for all Filipino boxers,” says Tiu Co. “Seems like Heno wasn’t really who the boxing gods wanted to win the title.”

The 25-year-old Heno is rated number 11 in the most recent WBC world rankings.

“We’ll still push forward [because] I’m sure good things are in store for him,” says Tiu Co. “I told him to make this his motivational drive.” – Rappler.com