Irving pours in 35 to lead Celtics over Hawks 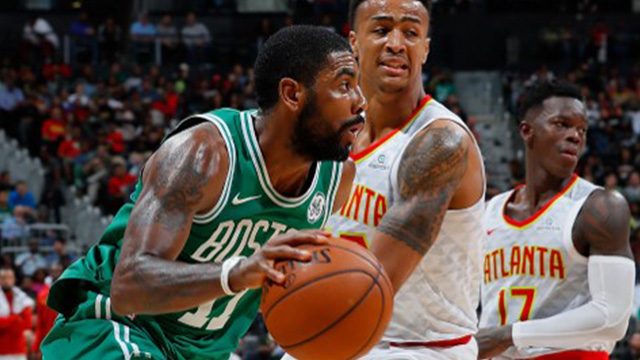 Irving broke the 30-point barrier for the first time since joining the Celtics as Boston made hard work of edging past the 2-9 Hawks.

9 in a row. #Celtics pic.twitter.com/4ABTO1shfj

Boston needed a 3-pointer from Irving with 1:37 remaining in the game to finally subdue the Hawks, giving the Celtics a 104-103 lead.

It was the final twist of a game that saw no fewer than 25 lead changes.

“He made huge plays down the stretch,” coach Brad Stevens said of Irving. “I thought he not only made the plays, but he made a lot of right reads, too.”

Stevens said he suspected Irving might be due a big performance after an 11-point outing in his previous game at Orlando on Sunday, November 5.

“When you’re coaching against people, I always look at the box score for the game before,” Stevens said.

“If they really struggled but they’re really good, that’s just scary stuff. Guys like that don’t have quiet nights twice in a row.”

Jayson Tatum also weighed in with a double-digit tally, scoring 21 points while pulling down 8 rebounds.

But Irving’s virtuoso display was the main talking point amongst his team-mates after the win.

“It’s exciting to be out there on his side, watching him do all those incredible things,” said Celtics rookie Tatum. “He’s a great player.”

Irving, meanwhile, was pleased with the way Boston held on to close out the win.

“We had to get our act together,” Irving said. “You could just tell that mentally and physically, we were dragging a little bit.”

Irving’s decisive late 3-pointer settled a wild encounter which had seen the Hawks battle back from a 10-point deficit in the fourth quarter to lead 96-95 with 5 minutes left on the clock.

Irving’s triple broke Atlanta’s resistance however, to give Boston their best winning streak since the 2010 campaign.

Boston now lead the Eastern Conference with a 9-2 record.

Atlanta, who had stunned Cleveland on Sunday, November 5, in an upset win, are bottom of the conference at 2-9. – Rappler.com