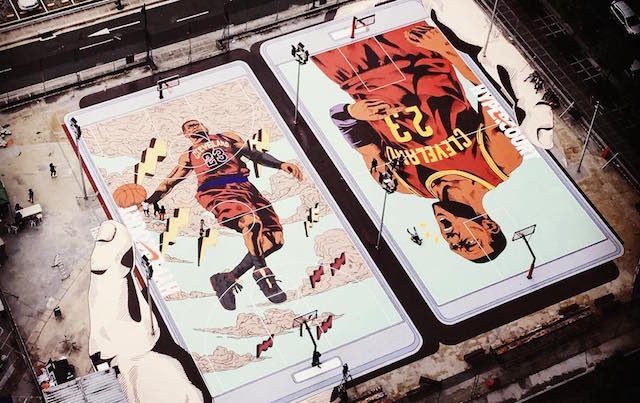 MANILA, Philippines – Cleveland Cavaliers superstar LeBron James recently took the time to give a special shout out to his Filipino fans on Instagram on Wednesday, November 8, after he saw the commission of two basketball court-sized murals in his image at the Titan Love Court in Bonifacio Global City, Taguig.

Just wanna inspire and influence as many people in this as possible while I live! S/O to all my fans in the Philippines  for this mural as well as all the other countries around that allow myself to be an INSPIRATION to the youth and beyond! Thanks you!! #striveforgreatness #livelaughlove #promiseiwontstop

The two murals featured James screaming a rallying cry on one court and James in motion for a signature cock-back dunk on the other.

The court mural was commissioned shortly after “The King” returned to the Philippines for this “Strive For Greatness” tour held on September 2. During his time in the country, he mingled with fans, the press and fellow basketball players including Gilas Pilipinas Cadets. He also spent time with less-fortunate kids in Tenement, also in Taguig.

James’ Instagram post also included the hashtag #promiseiwontstop, which will surely come in handy in the immediate future as the Cavaliers are currently struggling with a 5-6 record, only good for 9th in the NBA’s Eastern Conference. – Rappler.com