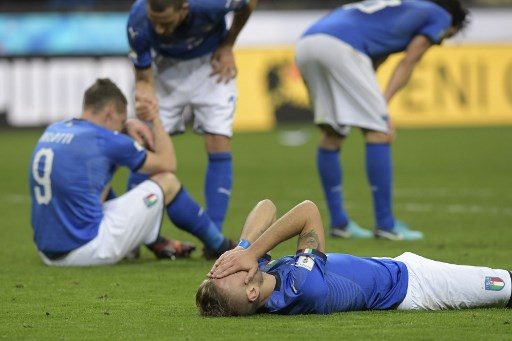 ROME, Italy – Italy’s failure to qualify for the World Cup for the first time in 60 years was greeted by a mixture of disbelief, dismay and resigned disappointment by fans across the country.

In Rome’s trendy San Lorenzo district, the Le Mura bar, which showed the playoff crunch on Monday, November 13, with Sweden on a big screen, emptied at the final whistle after a goalless stalemate which condemned the Azzurri to a 1-0 aggregate defeat.

“It is really very sad because watching the World Cup was something that really brought us together as Italians,” said recent graduate Stefania Pusateri, heading for the exit.

“But what is sure is that the shock will be even worse for my father. He is 54 years old and he has never had to go through something like this.”

Sitting alongside Pusateri, friend Davide Penna concurred. “I still can’t believe it has happened,” he said. “We have never experienced anything like this. It’s over.”

Similar sentiments were voiced by fans coming out of the San Siro stadium in Milan after Monday’s 0-0 draw.

“I am disappointed with the whole football system in Italy,” said Mirko Palmieri. “It is the umpteenth failure of our country. Even here (at the San Siro), we can’t get the job done.”

Italy not being at the World Cup will be a new experience for most of the country’s fans, and few of them are looking forward to the experience of watching from the sidelines.

The 4-time champions opted not to play at the first World Cup in 1930 but they have been present at every other edition apart from 1958, when they also failed to qualify.

“I was born with Italy being a part of the World Cup, and it has always been like that,” one supporter told AFP on his way out of the Milan stadium.

“Tomorrow I will wake up and my life will go on but this summer I will do something else.”

Another added: “The disappointment is a double one – first because we are not good, but second because we were beaten by a team that is even worse than us.”

Back in the Rome bar, the view that Italy deserved to be on the plane to Russia was disputed by journalism student Christian Dalenz.

“The reality is they were not good enough, they haven’t earned the right to be at the World Cup. This is a very weak squad. It just does not have enough world-class players who can make the difference.”

The extent of the shock that non-qualification represents for Italian football was underlined by the pre-match confidence of most fans that Gigi Buffon and co. would pull through.

“It is not as if Sweden are that strong a team,” Fabio Votano, a Roman who was only a toddler when Italy last missed out on a World Cup finals, had told AFPTV hours before kick-off.

“Not winning is completely unthinkable, basically something that has never happened before. For Italy, getting to the World Cup finals is almost a duty.”

Italy ended up in the playoffs as a result of finishing second in their qualifying group behind Spain.

They then put in a sluggish performance in the first leg in Sweden, when the home side edged a scrappy, physical affair thanks to substitute Jakob Johansson’s deflected shot just after the hour mark.

“They’re playing miserably at the moment but Italy still has a good set of players in my opinion,” he said. “It is all down to mentality.

“You cannot have a good World Cup without Italy.” – Rappler.com