Apr 24, 2018 10:57 AM PHT
Agence France-Presse
Facebook Twitter Copy URL
Copied
(UPDATED) The win gives Houston a 3-1 lead in the best-of-seven series and a chance to advance to the second round with a game 5 win 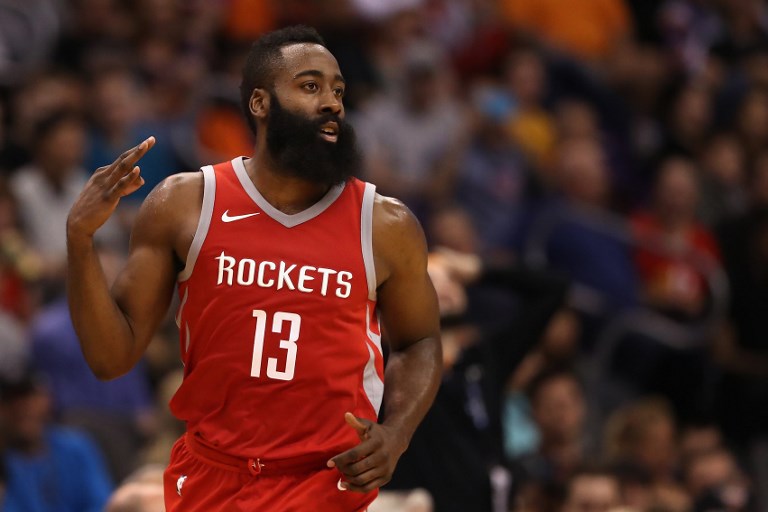 LOS ANGELES, USA (UPDATED) – James Harden scored 36 points as the Houston Rockets moved to the brink of a Western Conference first round playoff series victory with a 119-100 rout of the Minnesota Timberwolves on Monday, April 23.

Harden underscored his status as front-runner for the NBA’s Most Valuable Player award after leading a stunning 3rd quarter performance that saw the Rockets explode for an astonishing 50 points.

That devastating burst of scoring – a franchise record – included 22 points from Harden as the Rockets transformed what had been a one-point contest at half-time into a comfortable victory.

“We hit the switch that we’ve been trying to hit since the beginning of the playoffs, at both ends of the court,” a satisfied Harden said afterwards.

“It’s pretty scary what we’re capable of when we’re locked in defensively like that and when we get rolling offensively.”

The win gives Houston a 3-1 lead in the best-of-seven series, giving the Western Conference leaders a chance to clinch their place in the second round of the playoffs with a victory at home in game 5 on Wednesday, April 25.

The smart money will be on Houston to wrap up the series quickly after Monday’s demolition job at Minnesota’s Target Center arena.

“It was a great (third) quarter for us,” Harden said. “It gave us the belief. Now we go back to the crib and try to finish it off.”

Point guard Chris Paul weighed in with 25 points – including 15 in the lop-sided 3rd quarter – while Eric Gordon had 18 and Trevor Ariza 15.

Center Clint Capela finished with 14 points, and also pulled down 17 rebounds during his 31 minutes on court.

The Timberwolves’ scoring was led by Karl-Anthony Towns with 22 points, while Jimmy Butler (19) and Derrick Rose (17) also made significant contributions.

Minnesota had looked capable of snaring a series-leveling victory after a close first half, in which the Rockets take a slender 50-49 lead at the break.

But Houston’s scorching 50-point 3rd quarter saw the Rockets head into the 4th quarter with a 100-69 lead.

While Minnesota closed the gap as Houston eased up, the Rockets never looked like surrendering the initiative, keeping the Timberwolves at arm’s length as they closed out the win. – Rappler.com