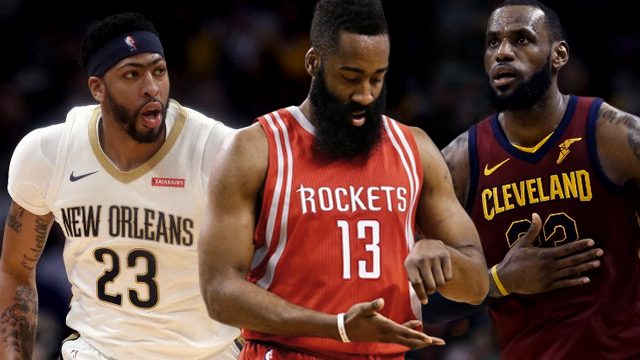 Facebook Twitter Copy URL
Copied
The Rockets star may be tipped to succeed Thunder's Russell Westbrook, but LeBron James and Anthony Davis stand in the way

LOS ANGELES, United States – Houston’s James Harden, who was runner-up in the NBA Most Valuable Player voting the past 3 seasons, was instrumental in the Rockets’ run to a league-leading 65 regular-season wins.

But will the Rockets star finally take home the top league honor?

James, who at 33 produced one of the best seasons of his outstanding career, is in the running for a 5th career MVP title.

He’s joined by Cleveland’s LeBron James and New Orleans’ Anthony Davis as finalists for the top individual plum, the league announced Wednesday, May 16.

Harden, the league’s leading scorer in the regular season with an average of 30.4 points per game, appears the favorite to succeed Oklahoma City Thunder star Russell Westbrook as MVP when the awards are announced on June 25.

James led the league in minutes played per game as he helped the inconsistent Cavaliers into 4th place in the Eastern Conference.

He could join Bill Russell and Michael Jordan as 5-time MVP winners. Kareem Abdul-Jabbar is the all-time leader with 6.

Davis and the Pelicans overcame a season-ending injury to sidekick DeMarcus Cousins to earn the 6th seed in the Western Conference.

Davis averaged a career-best 28.1 points to go with 11.1 rebounds and 2.6 blocks and is also a finalist for Defensive Player of the Year along with Rudy Gobert of the Utah Jazz and Joel Embiid of the Philadelphia 76ers.

Utah’s Donovan Mitchell, Philadelphia’s Ben Simmons of Australia and Jayson Tatum of Boston are the finalists for Rookie of the Year.

The finalists in all categories were determined by voting by a global panel of sportswriters and broadcasters.

Coach of the Year finalists include Boston’s Brad Stevens, Quin Snyder of Utah and Dwane Casey, the Toronto coach who was sacked by the Raptors after they were swept 4-0 by the Cavaliers in the second round of the playoffs. – Rappler.com