Facebook Twitter Copy URL
Copied
The outspoken nature of the former Philippine football coach may have cost him his post, but the American deserves praise for the Azkals' play under his watch

MANILA, Philippines – Thomas Dooley once told me a story about his days in Major League Soccer (MLS), where he finished his career in the turn of the millennium.

Back then MLS, in an attempt to cater to American fans, decreed that no match could end in a draw. If 90 minutes  wasn’t enough to separate the two sides, the teams went into a shootout.  But instead of penalties, players started from outside the box and had a few seconds to dribble and shoot.  This is how they went:

Dooley hurt his leg badly in one game that ended in a tie. Despite his injury, the coach wanted him to participate in the shootout. Dooley was sure he was going to miss. He never took his shot though, because one of his teammates earlier in the order flubbed his attempt, ending the contest.

“What might have been,” is once again the theme of Dooley’s professional life. The German-born American  was not given a contract extension to coach the Azkals, with Terry Butcher being appointed on Thursday, June 14, to take over. This despite going unbeaten in the last stage of AFC Asian Cup qualifying to bring the team to the United Arab Emirates in January, an unprecedented feat.

Dooley exits with a record of 20 wins, 11 draws, and 15 losses since coming in as coach in early 2014.  That makes for a 55.43 win percentage when you split the draws between the wins and losses.  Not dominant, but considering the caliber of opponents his side faced, quite impressive.

At the start of his tenure, the Pinoys were ranked 130th in the world. Today, they are 15 spots higher at 115.  That is also a solid achievement, and there is one  noteworthy detail that makes it look better.

Last December the Philippines joined a pocket tournament in Taiwan at the last minute, sans many of their top players, who were involved in the PFL playoffs. Dooley was reportedly unavailable because of prior commitments, so Marlon Maro handled the team, which lost to Timor Leste, a much lower-ranked side.

That game does not count in Dooley’s record but it did affect our ranking. It might be even higher if not for that.

In his last game he helmed the team to a memorable, come-from-behind win at home over Tajikistan in March to catapult the Philippines to its first-ever AFC Asian Cup slot.

The afterglow of that classic victory in front of 4,600 fans in Rizal Memorial should have made him a lock for a new contract, which would have been his second extension. Instead, he must look elsewhere for employment as the PFF has now put Butcher in charge.

That night against Tajikistan capped a solid stint in charge of the Philippines. Dooley brought the Azkals to the cusp of the Asian Cup in 2014 when they reached the final of the last Challenge Cup, falling to Palestine 1-0.  He also sent them to another AFF Suzuki Cup semifinal in 2014, where they were denied a finals berth by Thailand. 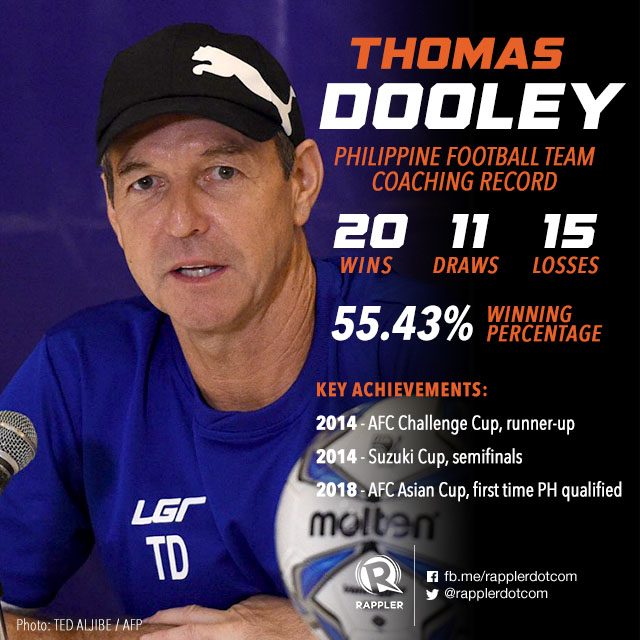 The other massive achievements were the results against Korea DPR in the succeeding World Cup qualifying cycle, a gutsy 0-0 draw in Pyongyang and the mythical 3-2 win at home in March of 2016.

His teams often played beautiful football, and were usually tough on the road, November’s goalless draw against Nepal notwithstanding.  The 0-0 in Pyongyang is good evidence, as was last year’s 4-3 qualifier win at Tajikistan after the Pinoys were taken to the woodshed against China just days earlier.  The Challenge Cup semifinal in 2014 was in front of a very hostile Maldivian gallery, but the Philippines prevailed in extra time anyway, 3-2.

Dooley also employed the use of analytics to gain data on his team’s performances. The PFF used a data company that provided him with all sorts of info on a match. This was going on as early as 2014 and must have been a huge help.

The former centerback also made some very tough personnel decisions that worked out well. He did not give Amani Aguinaldo his first cap, but did start him in the cauldron of the Challenge Cup. The centerback has since blossomed under his tutelage.

There was another big call in the 2016 Suzuki Cup when 17-year old Marco Casambre was given a shocking start in central defense. The youngster did well, and the Pinoys only conceded when he was subbed out.

Other young homegrown players were given time under Dooley, like Paolo Bugas, Daniel Gadia, and Fitch Arboleda.  Dooley was very open to players raised from here. I remember watching a UFL game in McKinley Hill sitting beside him in 2014. In that match Stallion captain Ruben Doctora produced an amazing volley with his weaker left foot off a pass from behind him. The shot was on-target but saved.

“You can tell he is experienced,” he told me of Doctora. Next thing we know, the Barotacnon striker known as “Balot” was in the Azkals, scoring against Nepal a few months later.

Dooley also made some choices in qualifying campaigns that bore fruit. The Yemen game in Qatar stands out. Dooley played the untested Sean Kane in the middle of the defense and he was a rock. Dooley also dusted off an aging Paul Mulders and put him in the lineup.

When Manny Ott went down injured Mulders took his place in the center of the park and delivered the assist on Mike Ott’s late equalizer.

A year earlier he made Miguel Tanton of Kaya his “magic bunot,” (magic pick), inserting him in the lineup against Korea DPR at home. Tanton’s cheeky backheel assist allowed Manny Ott to blast in the tying goal.

The biggest blot on his CV was the desultory 2016 Suzuki Cup campaign, where the Azkals exited in the group stage winless, despite playing at home.  That campaign was reportedly bedeviled by some off-field issues.

The outspoken nature of Thomas Dooley

Dooley recovered from that letdown in the Philippine Sports Stadium to bring the Azkals to the AFC Asian Cup. So why not let him stay on?

While I am not privy to the thinking behind PFF, some aspects about Dooley are plain to see. Firstly, he is a very chatty guy who will go on and on about a subject he is passionate about. He’s also extremely blunt and somewhat opinionated.  Very German, and also American in a sense.

Time and time again, he has let loose about the aspects of team preparation that were not up to spec. He has also criticized Ceres Negros publicly for not releasing players early for Azkals duty.  Ceres, where many Azkals play, usually releases on the dates prescribed by FIFA.

Before the last qualifier he made it clear that things were not ideal in the lead-up to the game.

“When you look at the development of the team and my involvement with the team in the last two years, every time when we had problems, I didn’t make a decision at all,” he told me.

“So I’m not getting any help from anything and we still haven’t lost a game (in AFC Cup qualifying),” added the coach. (READ: Azkals get ready for huge qualifier against Tajikistan)

Dooley was also unafraid to voice his displeasure at the football media. In the home match against Yemen last year in Bacolod, he began the pre match press conference with a diatribe against media who were not supportive of the squad.

If I recall he went on about it for a good 10 minutes in front of about 30 members of the media, many local writers from Bacolod. The rant left many of us in the football writers pool flabbergasted.

It seemed Dooley really only had a problem with one writer, and after the press conference, the coach engaged that scribe in an animated but civil conversation. Truth be told, Dooley’s fulminations came from a good place. He wanted things to be better. He wished for the right pieces of the puzzle to fall into place, for the benefit of everyone concerned.

Dooley wanted his words to be the grain of sand that sneaks into the jaws of an oyster. Irritating at first, but eventually that parasite leads to the creation of a pearl.

Perhaps the management of the team and the PFF didn’t quite see it that way. It seems they felt Dooley’s public broadsides didn’t put them in the best light.  Dooley appeared to be throwing his employers into a place from which the undercarriage of a Ceres vehicle may be inspected.

This may be conjecture, but I strongly suspect this outspokenness contributed to his non-renewal.

And then there is Stephan Schröck, arguably the best Filipino player around. Dooley feuded very publicly with the midfielder after the 2014 Challenge Cup. They made up and the coach selected him again a year later, and for the 2016 Suzuki Cup. They fell out again afterwards and Schröcky appeared to retire from international football on a Facebook post.

Dooley said it was nothing personal, but that Schröck was “not a team player.”

What I hear from Ceres, Schröck’s club, is that the former Bundesliga standout is very easy to manage, and that they have no issues with him.

On one side, Dooley is showing that he is in charge, and he must put his foot down on any behavior he deems improper by anyone. On the flip side, a great coach has the man-management skills to handle star players and keep them onside.  The truth is always somewhere in between.

Did the PFF want a coach who can work with Schröck and lure him out of international retirement, especially with the two tournaments coming up? It’s possible.

Dooley is a coach, not a politician. And he is comfortable holding an unpopular opinion. After all he is a diehard fan of US President Donald Trump.

The former USA captain will find another job. His accomplishments in the Philippines will not go unnoticed.

The team he leaves is a solid mix of youth and experience, and the incoming coach will have a promising side with the AFF Suzuki Cup and Asian Cup next year.

Under his watch several young players just before their prime, or settling into it, have been developed.  Daisuke Sato, Junior Muñoz, Kane, Dennis Villanueva, Kevin Ingreso, Pika Minegishi,  Mike Ott, Kenshiro Daniels, Pat Deyto, Curt Dizon, among others, all enjoyed Dooley’s confidence and did well wearing the shirt.

Throw in the likes of OJ Porteria, Jhan Jhan Melliza, Josh Grommen, Tyler Matas, Harry Foll, Dylan De Bruycker, and incoming players on the radar like Raphael Obermair, and you could have a breakout squad. Despite the rancor and controversy, Dooley has set the table for his successor well.

A few months ago I enjoyed a round of golf with Dooley.  He told me a story in the Philippine Navy Golf clubhouse in between the 9th and 10th holes.

While cradling an ice-cold Pale Pilsen, the coach reminisced about the remarkable team spirit the Azkals had displayed in beating Tajikistan. He said a few nights before the game the players were engaged in a silly Uno Stacko game in the lobby of the Century Park hotel.

It was getting late but Dooley didn’t want to tell his charges to sleep yet because they were having so much fun. In the end Sean Kane “lost” the game and had to buy ice cream for everyone else.

You could see a glow in his face as he retold the moment. To him, the esprit de corps was what led the squad to the greatest victory of their lives days later.

Thomas Dooley is imperfect, just like so many of us helping football here. But his time as Azkals coach deserves to be remembered fondly.  – Rappler.com