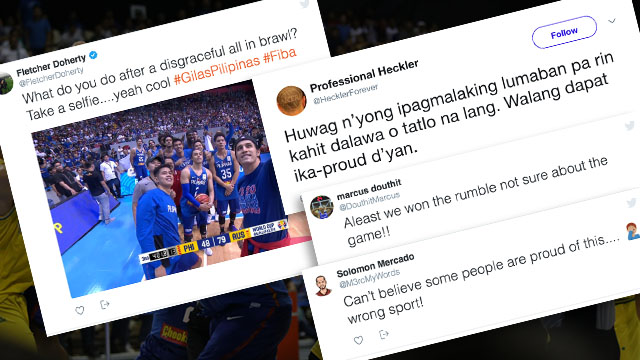 MANILA, Philippines – From ballgame to a fistfight real quick.

Just when everyone thought it would be a regular international basketball game between the Philippines and Australia, things suddenly got ugly as the Gilas Pilipinas and Australia Boomers duel ended up in a bench-clearing brawl midway through the 3rd quarter at the Philippine Arena on Monday, July 2.

Netizens and spectators were shocked with the sudden turn of events resulting in a premature ending of the game. Social media users expressed their disbelief and embarrassment over the incident. Some also found it inappropriate that the Philippine team took selfies right after the commotion.

What do you do after a disgraceful all in brawl?
Take a selfie….yeah cool #GilasPilipinas #Fiba pic.twitter.com/d1fsOnl9Zx

Several sports personalities and other social media users pointed out how disappointing the game turned out. Here are some tweets about the scuffle.

The game saw the ejection of 9 Gilas Pilipinas players and 4 Australians.

Australia eventually won by default over Gilas Pilipinas, 53-89, as Gabe Norwood and June Mar Fajardo fouled out, leaving Baser Amer as the lone Filipino player. FIBA rules state that a team should have at least two players on the court for play to continue.

What are your thoughts on this incident? Let us know in the comments. – Rappler.com