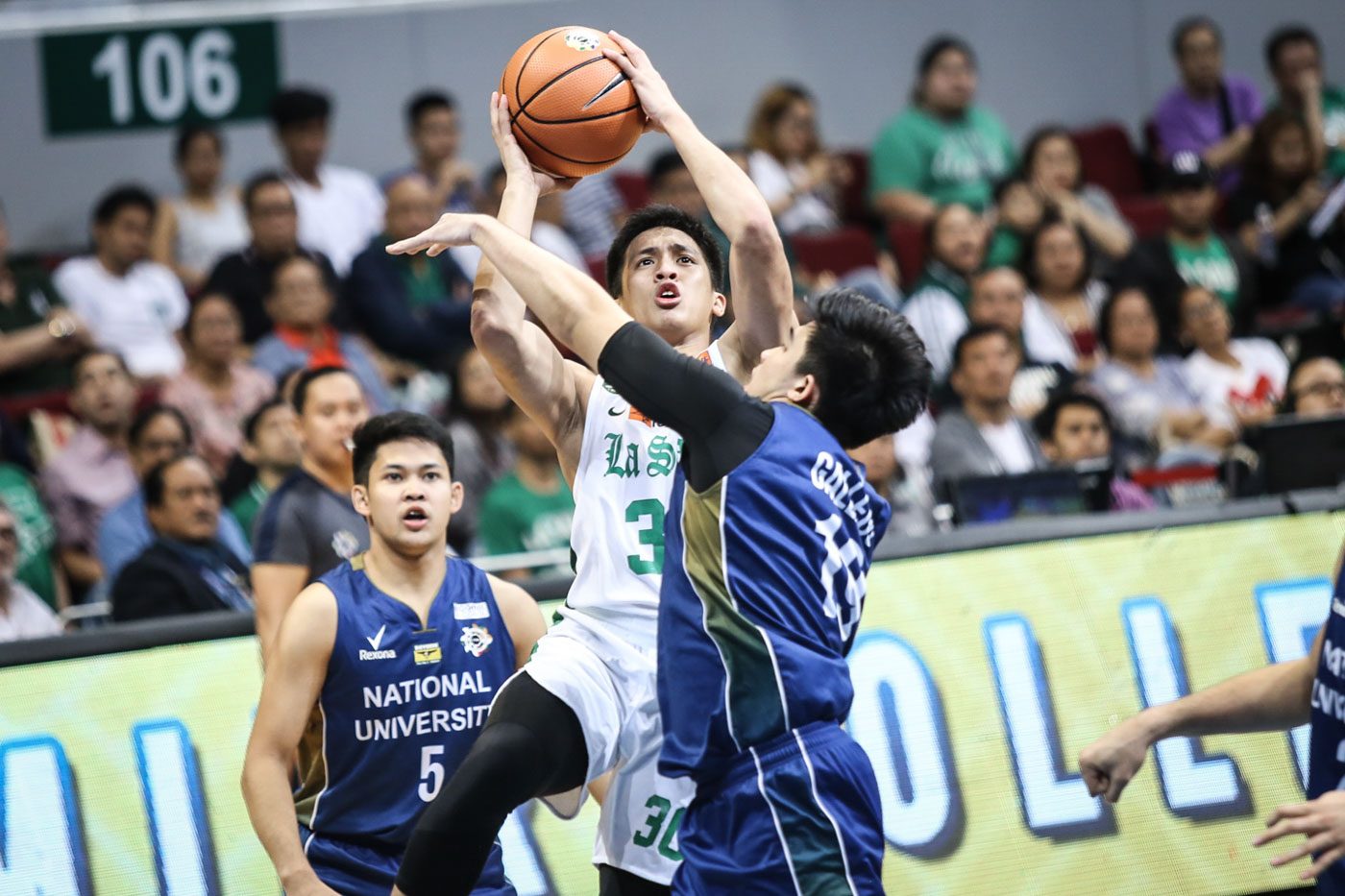 MANILA, Philippines – Justine Baltazar knocked in the dagger basket as La Salle rallied past the National University, 80-76, to grab its first victory in the UAAP Season 81 men’s basketball tournament on Wednesday, September 19 at the Mall of Asia Arena.

Baltazar buried the go-ahead jumper from the baseline, 78-76, with 28 seconds left before a pair of Andrei Caracut free throws cushioned La Salle’s lead with 10.7 ticks remaining.

(I guess we ran that play for around a 100 times in practice. That last play, I told Justine that if he gets the ball he should just shoot it.)

Aljun Melecio topscored with 19 points and Baltazar also had a huge double-double of 17 points and 12 rebounds as the Green Archers recovered from their opening-weekend loss to Far Eastern University.

Both La Salle and NU wound up with identical 1-1 records.

Melecio drew a crucial foul off Enzo Joson in the corner allowing him to sink 2 of 3 charities to tie the score at 76-all.

After Troy Rike missed both his freebies,  Baltazar nailed the decisive jumper before Caracut sealed the victory.

The Green Archers, last season’s finalists, bounced back from a lackluster 1-of-17 outing from beyond the arc in the first half in a 3rd-quarter surge capped by a Melecio triple that gave them the lead, 52-51.

(Playing agains NU coach Jamike Jarin for the last 3 years, I knew that he’d cook up a lot of strategies. Very evident in the first half that we struggled. We need to overcome a lot of things in order to compete well.)

After Rike’s freebies tied the score at 55-all, the Green Archers dropped an 8-0 run punctuated by a pair of threes from Jollo Go for a 63-55 advantage.

The Bulldogs rallied back with a 7-0 spurt in the payoff period capped by John Lloyd Clemente’s crucial 3-point play, 67-66.

After both teams traded leads, Shaun Ildefonso’s triple tied the game at 74-all followed by Rike’s jumper to give NU the edge, 76-74.

Dave Ildefonso paced the Bulldogs with 16 points while Rike added 15 points to go with 6 boards.