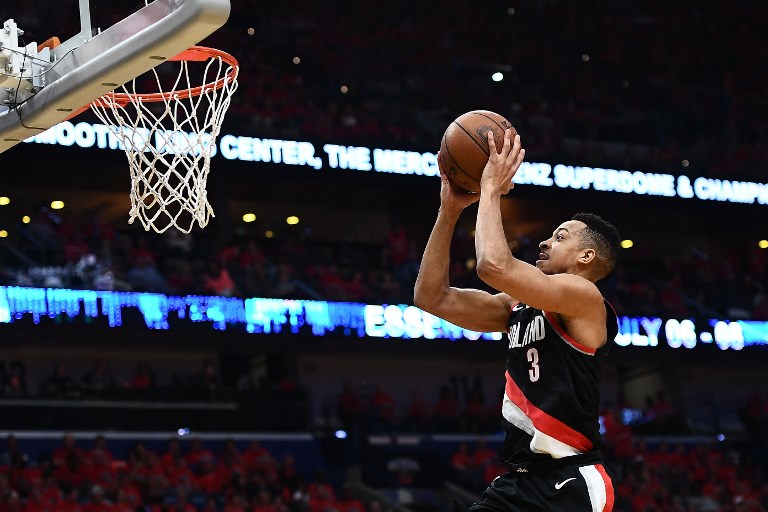 McCollum connected on 17 of 23 attempts from the field, including 5-of-10 from three-point range, as the Trail Blazers improved to 8-3 and handed Giannis Antetokounmpo and the Bucks just their second defeat of the season.

“It’s a great win for us,” said McCollum, who scored 19 points in the 3rd quarter alone.

Among his myriad highlights, a wicked move around Donte DiVincenzo that brought the Bucks rookie to his knees.

“Whenever you see a rookie you’ve got to be aggressive, attack them, make them move their feet,” McCollum said.

It was a breakout performance for McCollum, who had struggled to find his shooting touch in the first 10 games of the season.

He added 6 assists and 5 rebounds as the Trail Blazers snapped a four-game losing streak to the Bucks.

“I just tried to be aggressive and take advantage and help the team get a win,” McCollum said.

Evan Turner posted his first double-double of the season with 16 points and 11 rebounds, also handing out 4 assists for the Blazers. Damian Lillard, Jusuf Nurkic and Jake Layman also scored in double figures.

Antetokounmpo led a trio of Bucks players to score in double digits with 23 points, along with 9 rebounds and 6 assists.

Luka Doncic scored 23 points to lead 5 Dallas players in double figures as the Mavericks snapped a six-game skid with a 119-100 victory over the Washington Wizards.

Doncic, the 19-year-old Slovenian rookie, added 6 rebounds and 3 assists for the Mavs. Wesley Matthews added 22 points and Dennis Smith contributed 19 – making a trio of crucial plays down the stretch as the Mavericks thwarted Washington’s bid to rally in the second half.

The Wizards trailed by as many as 24 in the first half and were down 70-49 at halftime.

But they piled on the pressure in the second half, and trailed by just six with 5:33 to play when Smith got past Dwight Howard for an offensive rebound and fed DeAndre Jordan for a dunk that stretched Dallas’ lead to 101-93.

Less than a minute later Smith connected with Jordan on an alley-oop dunk, and Smith came up with a steal to feed Harrison Barnes for a three-point play that pushed the Mavs lead to 106-93.

“Resilience,” Carlisle said of what he saw from his team.

John Wall led the Wizards with 24 points. Otto Porter Jr. and Bradley Beal had 19 each, although Beal struggled from three-point range, making just one of nine.

In Charlotte, the Hornets survived 21 turnovers to beat the Atlanta Hawks 113-102.

Kemba Walker scored 29 points and handed out 7 assists and Marvin Williams added a season-high 20 points for the Hornets, who improved to 6-5.

Walker connected on 12 of 22 shots from the field, including 4-of-10 from three-point range. With 46 three-pointers this season he trails only Golden State star Stephen Curry. – Rappler.com