MANILA, Philippines –In the last two seasons, there was more than just rivalry at stake when the second-round UAAP showdown between Ateneo and La Salle rolled around.

In 2016, the Ben Mbala-led Green Archers held a perfect 13-0 record until the young Blue Eagles pulled off a shocker to spoil their formidable foes’ perfect record and force a Final Four series.

The total reverse happened the following year as a sharpened Blue Eagles side also looked headed for a 14-0 elimination sweep until the Green Archers stained their immaculate record.

This season, the two fierce rivals clash for a second time, and again, stakes are high.

The Blue Eagles stand just a win away from clinching a semis bonus while the Green Archers also need a victory not just to clinch a Final Four spot but also to stay in the twice-to-beat hunt.

The blockbuster duel kicks off at 4 pm on Sunday, November 11,  at the Smart Araneta Coliseum. 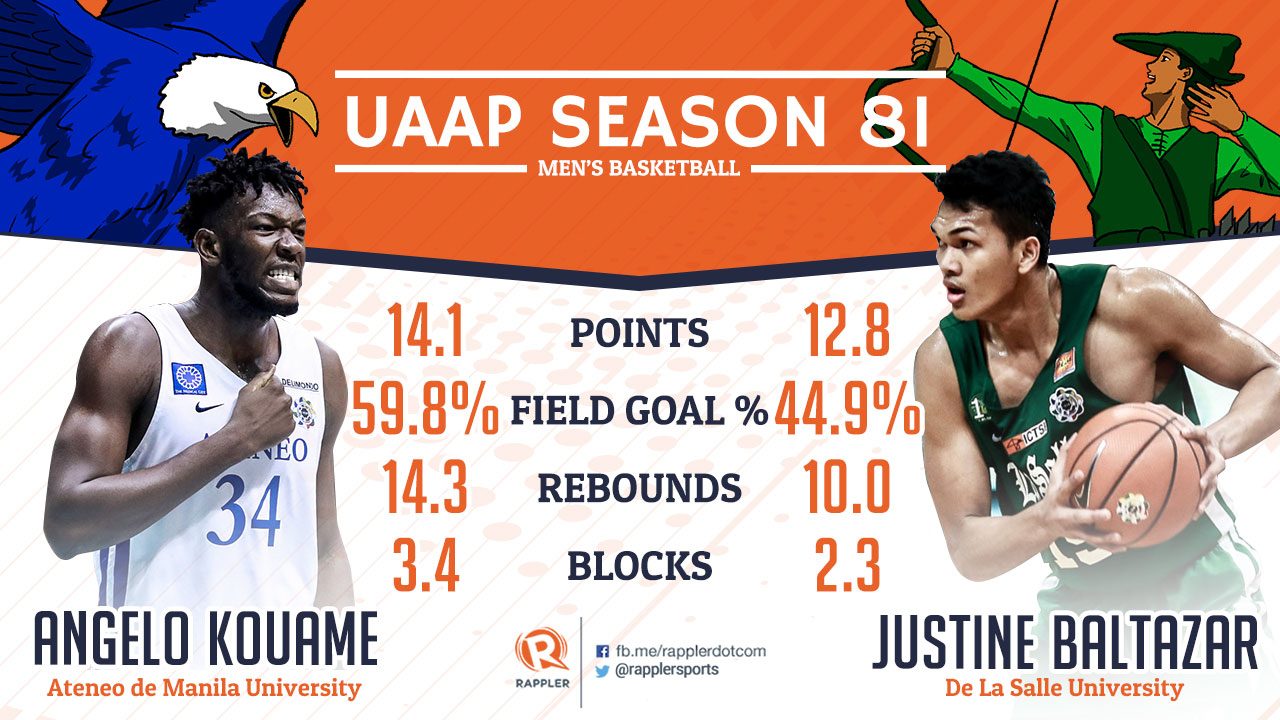 The defending champions have flashed their deep bench and elite defense that allowed them to trample almost every team that comes their way.

Although La Salle stands at a disadvantage, there’s one key department that the Green Archers can rely on – rebounding.

Despite missing Kiwi center Taane Samuel for most the season, La Salle tops the league in rebounds with an average of 48.3 boards.

In the first round, the Green Archers managed to out-rebound Ateneo, 54-43, but had a woeful 3 team assists as the Blue Eagles hacked out a 71-55 blowout win.

La Salle big man Justine Baltazar will be vital on both ends as he averages a double-double output of 12.8 points and 10.0 rebounds.

But Baltazar has an equally long and lean matchup in Angelo Kouame, who has been putting up monstrous numbers for the Blue Eagles to likewise average a double-double of 14.1 points and 14.3 rebounds per game to go with 3.4 blocks.

The Green Archers believe they’re “peaking at the right time” with improved defense and chemistry that translated to a three-game winning streak in the second round.

But will this be enough to defeat the Blue Eagles, who are determined to rediscover that “killer instinct” their head coach Baldwin has been preaching?

Since it’s an Ateneo-La Salle game, as always, anything can happen. – Rappler.com