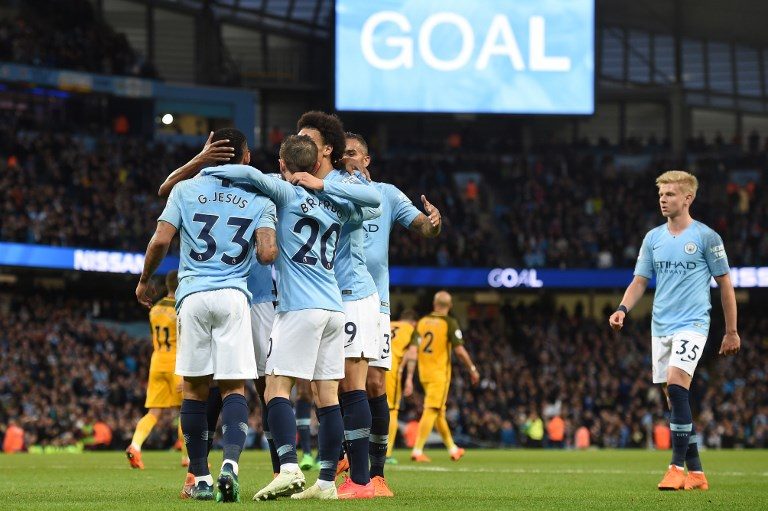 LONDON, UK – Reigning champions Manchester City returned to the top of the Premier League with a 3-1 derby win at home to Manchester United on Sunday, November 11, as Liverpool maintained its title charge with a 2-0 victory over basement club Fulham.

Chelsea, like the Top 2, remained unbeaten in league action so far this season but lost ground in a goalless draw at home to Everton. Fifth-placed Arsenal, meanwhile, were indebted to Henrikh Mkhitaryan’s late equalizer in a 1-1 draw with Wolves at the Emirates.

City ended the day 2 points clear of Liverpool and 4 in front of Chelsea.

Goals early in each half at the Etihad from David Silva and Sergio Aguero left City in a commanding position before an Anthony Martial penalty gave visitors United hope of a comeback.

But Ilkay Gundogan put the result beyond doubt 4 minutes from time with a third goal that crowned a sublime 44-pass move.

City manager Pep Guardiola said his side had to overcome “fear” before defeating their local rivals.

“We deserved the victory,” Guardiola told the BBC. “The first half, we played a little bit with fear but football is a game and we didn’t want to lose the ball.”

Asked why City had been fearful, the Catalan boss replied: “We wanted to play good in front of our fans and we know how important it is to play in this game.”

Defeat left United 12 points behind City just 12 games into the league season, with beaten manager Jose Mourinho accepting there was now a difference in class between the Manchester clubs.

“There is a gap, Manchester City start playing from the beginning of the season at a certain level that allows them to get a lot of points,” he said.

In midweek, United scored twice in the closing 5 minutes to secure a hard-fought 2-1 win away to Juventus in the Champions League while City continued its campaign in European club football’s elite tournament with a 6-0 thrashing of Shakhtar Donetsk at the Etihad.

“Everybody has to agree, it is one thing to go to Juventus and play against one of the best teams in the world for 90 minutes, another thing to beat Shakhtar Donetsk at home 6-0 and be very relaxed,” said Mourinho.

“We arrive in different circumstances.”

Earlier, Liverpool returned to winning ways after a shock 2-0 defeat by Red Star Belgrade in the Champions League.

But it needed a huge slice of luck in 14 seconds that completely changed the game shortly before the break.

Aleksandar Mitrovic headed home for the visitors only to be wrongly ruled offside.

The hosts quickly broke upfield and Trent Alexander-Arnold’s pass freed Mohamed Salah to score his eighth goal of the season.

“The most important thing is reacting in a situation like that and that was brilliant. Allison, Trent, Mo and done, it was a fantastic situation,” said Liverpool manager Jurgen Klopp, whose side put the result beyond doubt when Xherdan Shaqiri made it 2-0 in the 53rd minute at Anfield.

Chelsea could not beat England goalkeper Jordan Pickford at Stamford Bridge, with coach Mauricio Sarri saying: “I didn’t like the first 25 minutes.”

“We moved the ball very slow, so it was impossible for us to be dangerous.”

Arsenal was in danger of defeat after falling behind to Ivan Cavaleiro’s 13th-minute goal before Mkhitaryan came off the bench to rescue a point for the Gunners.

“This team (Wolves), when they scored the first goal, you need to bring things tactically because they were very organized,” said Arsenal manager Unai Emery. “You need to take a risk.

“I am happy with every player because they worked and with a good attitude.” – Rappler.com