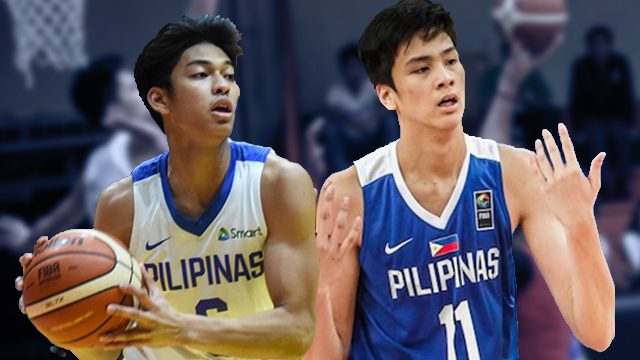 Facebook Twitter Copy URL
Copied
Although chances of seeing the Sotto and Rivero suit up for Team Pilipinas in the World Cup qualifiers are slim, the fiery mentor believes it could still happen

MANILA, Philippines – Kai Sotto and Ricci Rivero’s inclusion in Gilas Pilipinas’ 20-man pool for the fifth window of the World Cup qualifiers is not just solely geared towards their development.

National team head coach Yeng Guiao bared that the two promising young stars have a chance to secure a spot in the final 12-man lineup if they can prove their worth among their much experienced peers.

“Meron, meron (There is),” Guiao said when asked if Sotto and Rivero can make the roster that will take take on Kazakhstan and Iran on November 30 and December 3, respectively, in back-to-back home games.

“Actually, the reason they’re here is they’re one of the guys with the opportunity to fight for a slot in the 12-man lineup.” (READ: Sotto, Fajardo in action as Gilas prep resumes)

(Even if we say that the basic purpose is for their development, who knows? They might show us they deserve a spot.)

Sotto is the youngest in the bunch at 16 years old but he easily stands out with his towering 7-foot-1 height. He is the tallest in the talented pool comprising of PBA giants Greg Slaughter and June Mar Fajardo.

Rivero, meanwhile, has already been part of the senior team’s pool before. He was tabbed by Guiao for Gilas’ Asian Games buildup but did not make the cut in the final 12.

Although chances of seeing the Sotto and Rivero suit up for Team Pilipinas in the World Cup qualifiers are slim, Guiao believes it could still happen.

“I’m not discounting that possibility. It might be a little bit remote but it’s still a possibility.” – Rappler.com