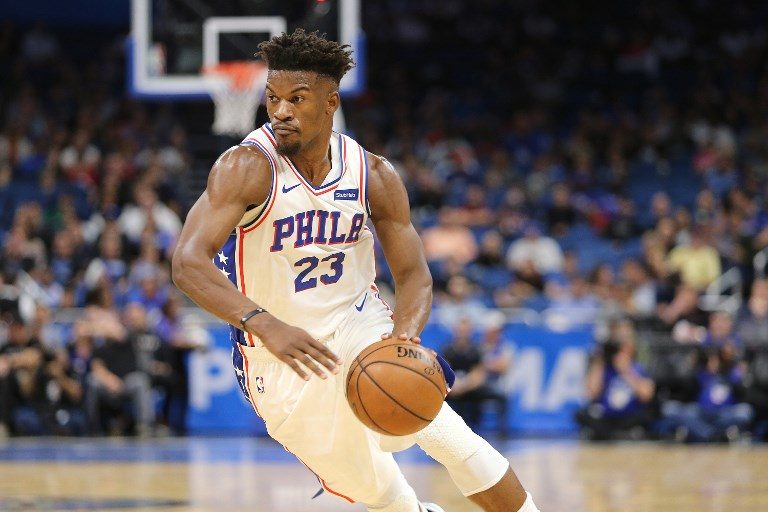 LOS ANGELES, USA – Nikola Vucevic scored 30 points as the Orlando Magic staged a fourth-quarter comeback to hand Jimmy Butler a defeat on his debut for the Philadelphia 76ers in the NBA on Wednesday, November 14 (Thursday, November 15, Manila time).

Vucevic drained two free throws with 5 seconds remaining to seal a wild victory which saw Orlando overturn a 16-point deficit in the final quarter to post a 111-106 win.

Orlando improved to 7-8 with the victory while the Sixers saw their record slip to 9-7.

“Not the outcome that we wanted to have,” Butler said afterwards.

“But we got a lot more of these things. I think we will all be better, myself included.”

Butler, who completed his move to Philadelphia from the Minnesota Timberwolves this week, finished with 14 points from his 32 minutes on court at Orlando’s Amway Center.

The Sixers and Butler however will be left wondering how they managed to blow what looked like being a straightforward victory.

Philadelphia had surged into a comfortable 92-76 lead with 10 minutes and 51 seconds left in the 4th quarter, seemingly well on track for a routine win.

However, Orlando came roaring back with an incredible 21-0 run to surge into a 97-92 lead.

The Sixers fought back to tie through Wilson Chandler’s three-pointer which made it 97-97.

Mike Muscala then added a triple off an assist by Butler to help take the Sixers into a 104-100 lead as the seconds ticked down.

With the score at 106-106 and only 8 seconds on the clock, Orlando’s Terrence Ross drained a three-pointer to make it 109-106 before Vucevic added the coup de grace with his two free throws to complete the scoring.

As well as his 30-point haul, Vucevic contributed 8 rebounds and 4 assists. Four other players made double figures, with Aaron Gordon adding 17 points and Ross finishing with 15 off the bench.

J.J. Redick led the Sixers scoring with 22 points while Joel Embiid had a triple double with 19 points, 13 rebounds and 10 assists.

Sixers head coach Brett Brown cautioned that it would take time to bed Butler into the team’s starting line-up.

“I thought that our guys were up and down, just trying to figure each other out,” Brown said. “Disappointed to lose with Jimmy’s first game. But there are a lot of good things you can see happen.”

Elsewhere Wednesday, the Eastern Conference-leading Toronto Raptors slumped to only their third defeat of the season in a 106-104 reverse against the Detroit Pistons at the Scotiabank Arena.

Blake Griffin did the damage for Detroit, with 30 points and 12 rebounds, while Reggie Jackson (13 points) and Andre Drummond (11 points, 14 rebounds) also played key roles in the win.

Kawhi Leonard led the scoring for Toronto with 26 points while Pascal Siakam and Greg Monroe both had 17 points apiece.

Toronto head coach Nick Nurse bemoaned his team’s failure to hang on to a 19-point lead during the defeat.

“We’ve done this a bit too often and I was hoping it wasn’t going to bite us in the butt,” Nurse said.

“We just took our foot off the gas defensively and suddenly a couple of threes go in, and all that work you’ve done has gone.”

The second-placed Bucks missed the chance to close the gap on the Raptors at the top of the East despite 31 points from Giannis Antetokounmpo and 25 points from Khris Middleton. – Rappler.com