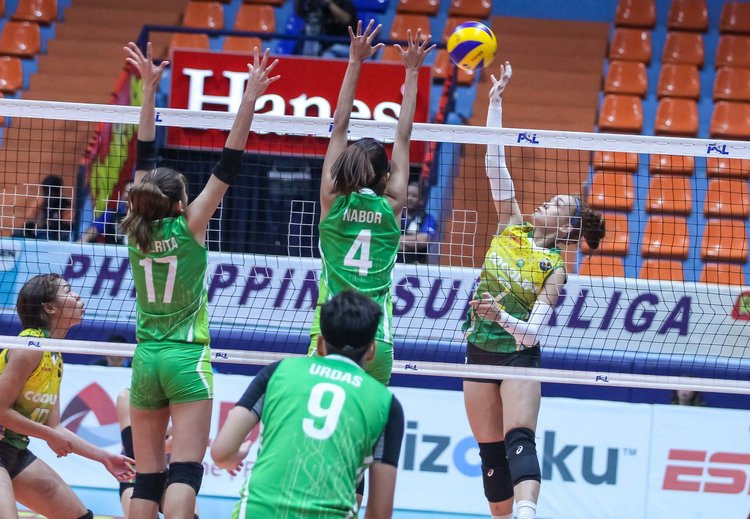 Grethcel Soltones played like a grizzled veteran down the stretch to power the Giga Hitters to their second win in 4 games.

“It was tough. Coming from two losses, it was really hard to regain our confidence,” said Sta. Rita following the grueling battle that lasted for two hours and 21 minutes featuring thrilling rallies, superb blocks and a lot of on-court hustles from both squads.

“Not everyone knows how difficult it was for the team. But we’re happy that we finally get another win.”

Marivic Meneses and Angeli Araneta also had 11 markers apiece for the Lifesavers, who improved to 2-3 while pinning a fifth loss on Sta. Lucia.

Generika-Ayala tallied 42 attacks compared to 14 hits of Sta. Lucia after 90 minutes of action.

After finishing at the bottom of the Grand Prix, the retooled Smart opened its bid with a victory over Sta. Lucia before bowing to powerhouse squads Petron and Foton in straight sets.

Against the young Asset Managers, the Giga Hitters simply refused to lose.

Soltones took the cudgels in the 5th set as the Giga Hitters raced to an 8-4 lead en route to match point, 14-11.

“In the 5th set, we told ourselves that we can’t afford to lose the game, we have to win the game to redeem ourselves and to regain our confidence back,” said Nabor, who accounted for 24 of the Giga Hitters’ 26 excellent sets.