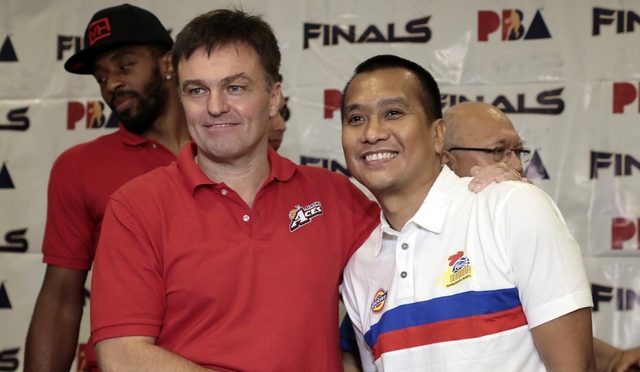 MANILA, Philippines – Someone’s got to give.

Alex Compton and Chito Victolero both have not won a championship as head coaches in the PBA but one is bound to bag his first title as Alaska and Magnolia tangle for the grand prize in the 2018 Governors’ Cup.

Interestingly, the two tacticians go years back after having shared the floor together for the Manila Metrostars in the now-defunct Metropolitan Basketball Association.

Victolero and Compton formed a formidable backcourt pair and helped Manila reach great heights in the MBA’s inaugural year in 1998. However, they fell to eventual champs Pampanga Dragons in the semifinals.

Fast forward to 20 years, the two have a chance to win a championship again, but this time, at each other’s expense.

Compton, though, wouldn’t have it any other way.

(For example, I reach the finals and I go up against someone I don’t know much about. Would I want to face that or my friend? I would choose my friend because that means one of us is going to win.)

The Aces four-year tactician has already been to 4 finals battles as head coach but lost all of them.

(I’m happy because the one who’s coaching on the other side is my friend, so when the series ends, someone between us wins a championship.)

For Victolero, meanwhile, it’s just the reality of being in the PBA: there will always be instances when friends clash, even for the coveted championship.

The two-year Hotshots mentor already reached the finals earlier this season in the Philippine Cup but loss to San Miguel in 5 games.

(Even if they are your friend, relative or former player, there will be chances when you will face them eventually.)

(The good thing about this is we can prepare so we can give the other team a good fight.)

Game 1 of the best-of-seven affair is slated on December 5 at the Araneta Coliseum. – Rappler.com