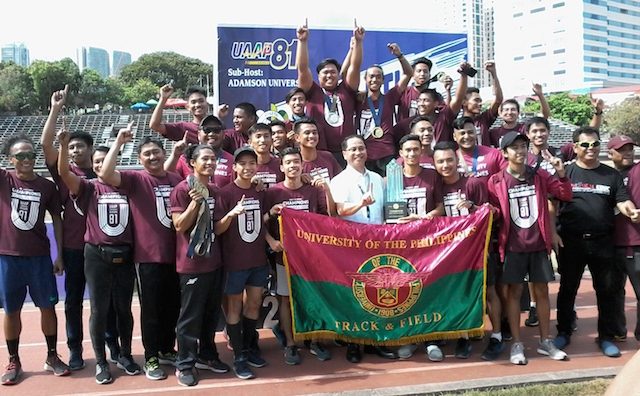 MANILA, Philippines – The University of the Philippines (UP) finally ended a 36-year title drought in UAAP athletics as its men’s team bagged the Season 81 crown on Sunday, December 2, at the Philsports oval in Pasig.

Trailing by 39 points midway through the 5-day competition, the Fighting Maroons banked on a 1-2-3 finish in the 400-meter hurdles, a podium sweep in the 800-meter run, and gold medals in the 4×100-meter relay and in the discus throw to seize the upperhand on Saturday, December 1, and never look back.

With 426 points, UP ended the Far Eastern University’s (FEU) 8-year reign. FEU finished with 262 points for 2nd place, while the University of the East finished 3rd with 185 points.

The Maroons claimed their 19th championship – the first since the 1981-82 season.

In his fourth year with UP, coach Rio dela Cruz fulfilled the school’s mission to become the kings of track and field once more.

(Before I was appointed as head coach, this was one of the goals I gave to UP, that after 3 to 4 years, we will become champions.)

(We are very happy we’ve achieved this. I can’t explain the feeling. This achievement is different.)

The University of Santo Tomas (UST) ruled the women’s division for the fifth straight year with 338 points to defeat FEU by only 11 points in a hotly-contested duel for the crown. UP tallied 203 points for the 3rd spot.

The University of the East’s (UE) young long distance specialist James Darrel Orduna was named the men’s Most Valuable Player and Rookie of the Year. He who won golds in the 10,000-meter run, 3,000-meter steeplechase, and 5,000-meter run to go with a 1,500-run bronze.

UST’s Louielyn Palmatian claimed the women’s MVP honors for the third straight season after emerging victorious in the 800-meter and 400-meter run, and in the 4×400-meter relay.  She also bagged silver medals in the 200-meter and 5,000-meter runs.

In the juniors’ division, UE completed another championship double.

UE had 383 points to achieve a 6-peat in the boys’ side, besting UST and Adamson University in the process.

With 465 points, UE defeated the National University (NU) and UST to annex the girls’ title for the fourth straight year. Abegail Manzano of the Bullpups was named girls’ MVP after a 4-gold and one-bronze haul.

NU made short work of the Adamson University, 25-17, 25-15, 25-11, to book the first championship slot in the boys’ division of the UAAP Season 81 high school volleyball tournament on Saturday at the Arena in San Juan.

Mac Arvin Bandola had 8 blocks to finish with 15 points, while Michael John Fortuna added 12 points, including 2 blocks, for the top-ranked Bullpups.

The best-of-3 championship for the girls’ title will start on Wednesday with 5-peat seeking NU and De La Salle-Zobel battling for the crown. – Rappler.com