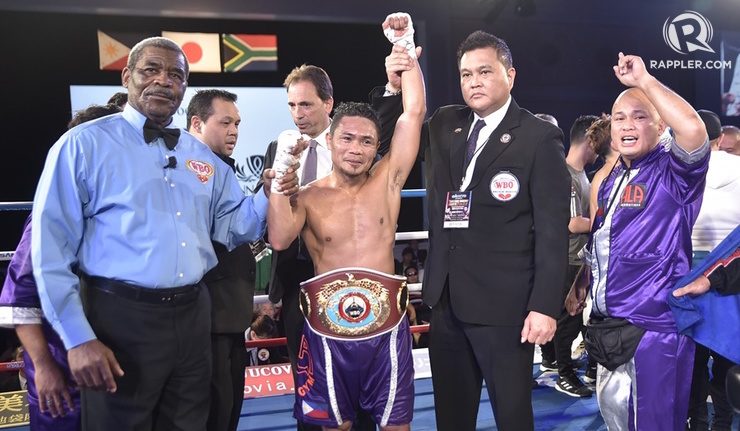 MANILA, Philippines – A big victory by Donnie Nietes over Japanese Kazuto Ioka on New Year’s Eve may yet spark another resurgence for Filipino boxers in 2019.

Nietes bested Ioka by split decision at the Grand Theater of Wynn Palace Cota in Macau on Monday night, December 31, to clinch the World Boxing Organization super flyweight crown for his fourth world title in as many divisions, joining countrymen Manny Pacquiao and Nonito Donaire as multiple champions.

The 36-year-old Nietes, who owns the distinction of being the longest reigning Filipino world boxing champion, added the 115-pound title to his WBO minimumweight and lightweight belts and his International Boxing Federation flyweight crowns. Donaire is a five-division ruler while Pacquiao is the sport’s only eight-division champion.

The 1st round was close with Ioka sneaking in jabs and Nietes answering back with a couple of lefts.

Ioka, two-inches taller, applied pressure on Nietes in the next two rounds only to be caught by hard rights and lefts coming in by the pride of Murcia, Negros Occidental, now based in Cebu.

Sensing that he was behind on the scorecards, Ioka geared up in the 9th round as Nietes slowed down a bit. Ioka also connected with a solid left cross on Nietes’ head in the 10th.

Nietes, however, recovered his bearing in the last two rounds and turned more aggressive.

It was a vindication for Nietes, who was held to a split draw by compatriot Aston Palicte in their battle for the same title at the Forum in Inglewood, California, last September.

Unscathed in his last 35 fights spanning 14 years, Nietes raised his record to 42-1-5 with 23 knockouts.

Foiled in his bid to become Japan’s first four-division world champion, the 29-year-old Ioka slid to 23-2 with 13 knockouts.

Nietes will next tackle the winner between Palicte (24-2-1, 20 KOs) and Puerto Rican Jose Martinez (20-0, 13 KOs), who will tangle in a WBO title eliminator at Viejas Casino and Resort in Alpine, California, on January 31. – Rappler.com