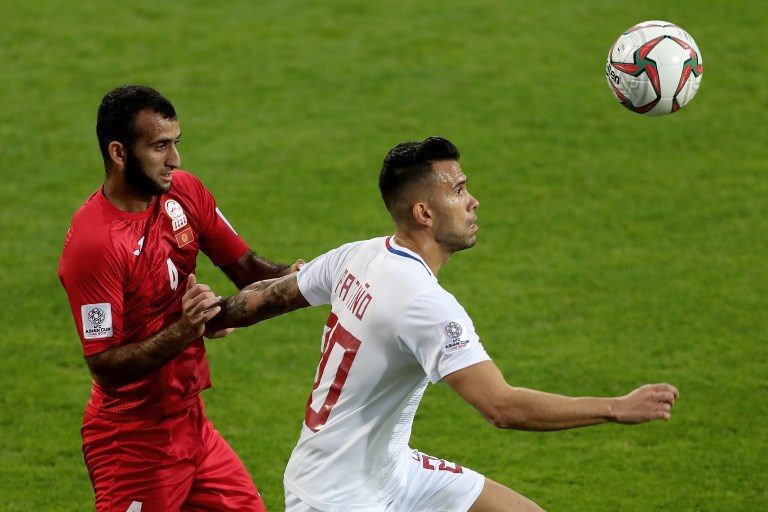 MANILA, Philippines –  The Philippine Azkals ended their 2019 Asian Cup campaign after dropping their final group stage game against Kyrgyzstan, 3-1, as Vitalig Lux scored a hat-trick on Wednesday, January 16, at the Al Maktoum Stadium in Dubai.

But even if the Philippine men’s football team crashed to the bottom of Group C, Stephan Schrock netted in Philippines’ first ever Asian Cup goal in the 80th minute.

Kyrgyzstan is still on track of advancing to the Round of 16 after finishing third in the group.

In the 24th minute, Vitalig Lux sent the Nationals into the doldrums when his shot found the back of the net thanks to an assist from Akhlidin Israilov.

Lux scored his second goal and doubled the lead in the 51st minute with an angled finish from Bekzhan Sagynbaev’s assist in the center of the box.

The Kyrgyzstan striker sealed the win with a hat-trick as he capitalized on a rebound off the post in the 77th minute.

The entry of the Younghusband brothers added more firepower to the Azkals as Javier Patiño and Patrick Reichelt had chances to cut the deficit towards the end of the match.

Kyrgyzstan had a strong start to the match as it held most of the possession as the Philippines’ backline had an off-day.

In the first half, the Azkals never established a clear threat in the attacking third and was running out of ideas on how to create chances. – Rappler.com