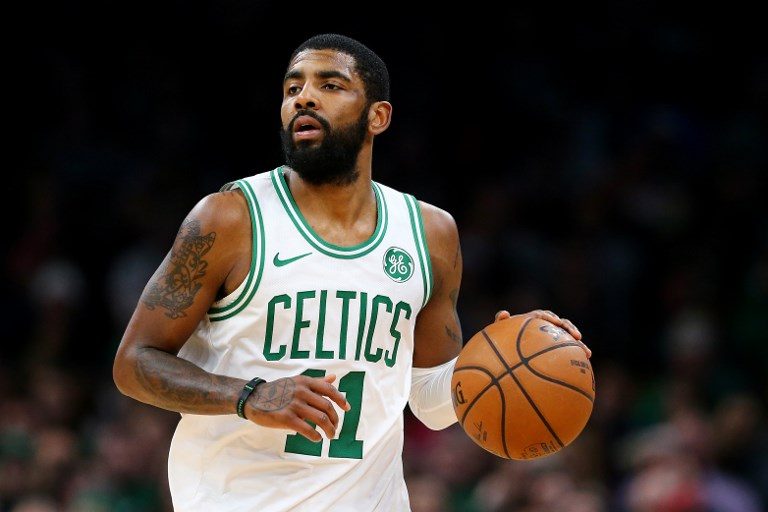 Facebook Twitter Copy URL
Copied
The Boston superstar, who can opt out of the last year of his contract, says the Celtics remain 'at the head of the race' for his services

NEW YORK, USA – Celtics guard Kyrie Irving says he’s focusing on bringing an NBA title to Boston this season – and where he might end up after the 2018-2019 campaign remains an open question.

“At the end of the day, I’m going to do what’s best for my career, and that’s just where it stands,” Irving told reporters on Friday, February 1 (Saturday, Februar 2, Manila time)

“And my focus this season is winning a championship with the Boston Celtics. Obviously, we had goals coming into the season, and the primary goal is to win a championship. So that’s where my focus is.”

Irving can opt out of the last year of his contract to test the free agent market at the end of this season.

In October, he cheered Celtics fans by proclaiming at a team event that if Boston wanted him to stay that’s what he planned to do.

On Friday, he sounded a more ambiguous note when asked if his mindset had changed.

With the departure of LeBron James from Cleveland to the Los Angeles Lakers, Irving-led Boston was tipped to emerge as a powerhouse in the Eastern Conference a season after the Cavs denied an injury-hit Celtics squad in Game 7 of the conference finals.

But it has been the Milwaukee Bucks and Toronto Raptors dueling atop the conference in the first half of the season, with the 32-19 Celtics currently tied for 4th place, 5.5 games behind the Bucks.

“Obviously, things this season haven’t gone as I planned,” said Irving, who is averaging 23.7 points per game. “That’s part of being on a team where you’re still trying to figure things out.”

Irving did say that the Celtics remained “at the head of the race” for his services after this season, and in the meantime he’d prefer to not have the “distraction” of looking ahead.

Nevertheless, speculation is sure to keep swirling around Irving, with suggestions that the Knicks – who traded Kristaps Porzingis to Dallas on Thursday in what many see as a move to clear salary cap space – could be among the clubs that will try to land him. – Rappler.com