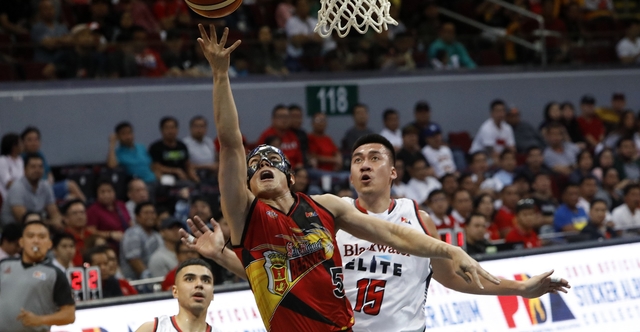 MANILA, Philippines – Alex Cabagnot’s return reinvigorated a struggling San Miguel squad on the way to a 93-79 drubbing of Blackwater in the 2019 PBA Philippine Cup at the Mall of Asia Arena on Wednesday, February 6.

Missing 4 straight games due to a hamstring injury, a masked Cabagnot saw action again and immediately made his presence felt with 19 points and 5 rebounds as the Beermen snapped a two-game skid to improve to 3-3.

June Mar Fajardo dominated with 20 points, 21 rebounds, 5 assists and 4 blocks for San Miguel, who broke the game wide open in the final two quarters after a tight encounter in the first half.

“It’s a good win for us and this win will serve as a morale booster for us. We’re able to arrest our losing streak, which is two,” San Miguel head coach Leo Austria said.

Terrence Romeo delivered 17 points, 5 rebounds, 4 assists and 1 block as a starter while Chris Ross put up 14 markers, 7 boards, 6 dimes and 2 steals off the bench in the win.

San Miguel imposed its size and will over Blackwater, swatting away a total of 16 shots.

Roi Sumang paced the Elite, who absorbed their fourth loss in 5 games, with 17 points, 6 assists and 5 rebounds while Mike Digregorio added 14 points, 3 rebounds and 3 assists.

Allein Maliksi had a double-double of 13 points and 12 rebounds and rookie Abu Tratter finished with 9 markers and 12 boards in the losing effort.