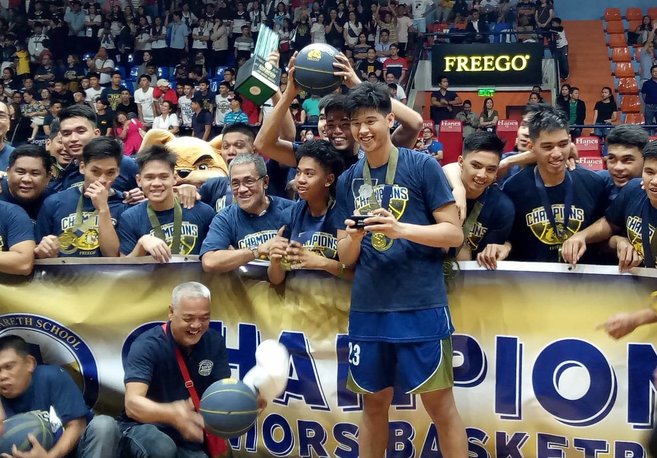 MANILA, Philippines – Carl Tamayo came to the NU Bullpups as one of the UAAP Season 81’s most anticipated blue-chip prospects.

However, his time in the Sampaloc-based school got off to a rocky start after he got sidelined with a nagging left ankle injury, putting him out of commission in 4 of their first 7 elimination games.

But the versatile 6-foot-7 big man slowly got back into rhythm even with limited minutes and eventually became a deadly piece off the bench for head coach Goldwin Monteverde.

His steady rise culminated in an unstoppable playoff run for the Bullpups, ending with a two-game Finals sweep of the Ateneo Blue Eaglets to claim their first juniors basketball title since 2016. (READ: NU crowned UAAP juniors king after sweep of Ateneo)

Aside from his first UAAP title, Tamayo was rewarded for his hard work with the Season 81 Finals MVP award after averaging 14 points and 11 rebounds in two games. He even held Season MVP Kai Sotto to a collective 1-of-10 (10%) shooting in the 4th quarter as his primary defender in both contests.

However, Tamayo downplayed his personal achievement as a mere bonus to the team’s ultimate goal of winning it all.

(It’s all about perseverance. I’ve gone through a difficult time. I wasn’t able to get in condition because I was always injured. But I didn’t stop until we achieved our goals.)

(I wasn’t thinking that I was going to get the Finals MVP. The only thing important for me is to get the championship.)

The Batang Gilas stalwart further steered the spotlight away from him by praising their collective efforts in their title hunt.

(Of course I’m happy, but behind all this success, we went through a lot of struggles, fatigue on the court, everything we went through was really difficult, but now we got our goal.)

(It really feels nice to get what you worked hard for.) – Rappler.com