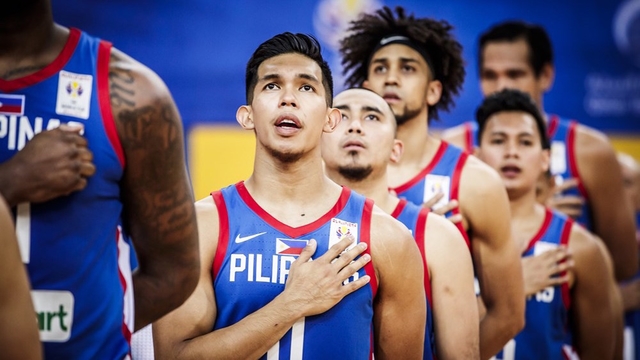 MANILA, Philippines – There’s no more room for mistakes for Gilas Pilipinas in its bid to reach the 2019 FIBA World Cup.

Otherwise, the Philippines will bid farewell to its World Cup aspirations.

But a win isn’t all Gilas needs as the Philippines also needs to rely on other teams to earn the last world berth.

Here is where things stand heading into the final day of the qualifiers:

Per tournament rules, the top 3 teams from each group and the best 4th placer will advance while China qualifies as host nation, making it a total of 8 teams from the Asia/Ocenia that will represent the region in the World Cup.

Rules also state that China shall not be included in determining the final standings, so a top 4 finish means teams under it will climb up the rankings.

The Philippines cannot afford to drop to 6-6 as it tries to become the best 4th placer since the worst-case scenario for both Lebanon and Jordan – whichever lands in 4th in Group E – is also slipping to 6-6.

To break a tie for the best 4th placer, the team with the higher point differential in all games in its group holds the advantage.

In this scenario, the Philippines will fail to qualify behind a point differential of +17 accumulated through 11 games, a far cry from Lebanon’s +99 and Jordan’s +80.

But beating Kazakhstan and improving to 7-5 will not necessarily make the Philippines the best 4th placer.

That’s because the best-case scenario for both Lebanon and Jordan – whichever finishes in 4th in Group E – is raising their records to the same 7-5 slate as the Philippines.

With that in mind, the Philippines will not become best 4th placer due to an inferior point differential compared to both Lebanon and Jordan.

What the Philippines must do is topple Kazakhstan and hope that either Lebanon or Jordan drop their games against Korea and New Zealand, respectively.

That way, either Lebanon or Jordan drops to 6-6 and slides to 4th place in Group E and the Philippines, by improving to 7-5, will advance to the World Cup as the best 4th placer.

There is actually another way the Philippines punches its World Cup ticket given it hikes its record to 7-5, although the chances of seeing this exact scenario unfold are highly unlikely.

What needs to happen is the Philippines forces a three-way tie at 7-5 in Group F with Japan, which must lose to Qatar, and Iran, which must succumb to Australia.

Japan and the Philippines will then qualify for the World Cup as they lock in on 2nd and 3rd places, respectively, while Iran slides to 4th due to an inferior quotient.

Here is the quotient among the 3 teams:

It could be counted on that Iran loses to Group F leader Australia, but Japan falling victim to Group F cellar dweller Qatar? Improbable, especially since Japan has won 7 straight games.

So the World Cup race comes down to the wire as the Philippines faces Kazakhstan at 10:30 pm, incidentally the same time of the games between Lebanon and Korea, Jordan and New Zealand, Iran and Australia, and Japan and Qatar. – Rappler.com