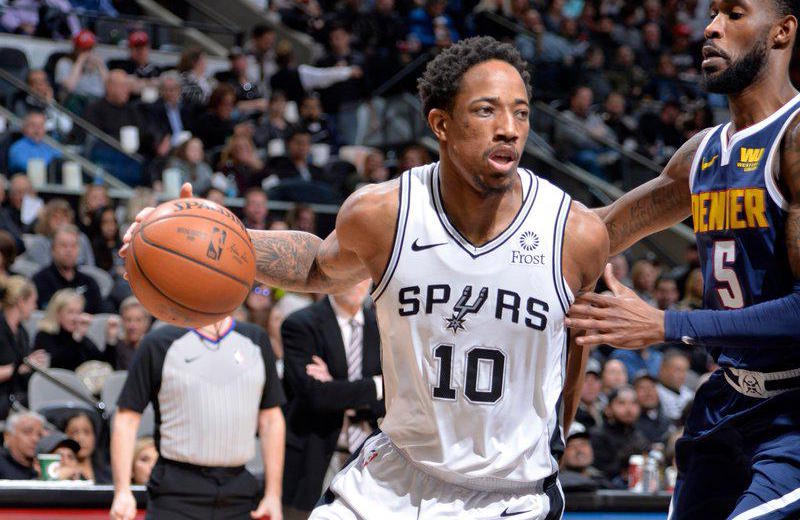 LOS ANGELES, USA – DeMar DeRozan and LaMarcus Aldridge combined for 46 points as the resurgent San Antonio Spurs won their 13th straight game at home against Denver by holding on for a 104-103 win on Monday, March 4 (Tuesday, March 5, Manila time).

DeRozan finished with 24 points and Aldridge scored 22 as the Spurs withstood a torrid comeback by the Nuggets who were down 21 points at one stage and scored the final 9 points of the contest.

Jamal Murray tallied 25 points to lead the Nuggets, who also missed 3 shots in the final 16 seconds of the fourth.

The Spurs have now defeated two of the top 3 teams in the Western Conference in back-to-back games after beating the Oklahoma City Thunder two nights ago.

Denver dropped to two games behind two-time defending champion Golden State Warriors for the top record in the West.

Rudy Gay finished with 14 points and 9 rebounds, guard Derrick White had 11 points and 9 assists for the Spurs, who won despite being held scoreless over the final 2 1/2 minutes.

San Antonio have now won 9 straight and two of 3 games against Denver this season. They are ahead 118-68 lifetime over Denver.

Nuggets guard Murray missed a three-point attempt with 16.2 seconds left and Gary Harris failed on another shot from beyond the arc from the left corner as the buzzer sounded.

Nikola Jokic finished with 22 points and 10 rebounds for Denver in its third straight loss. Harris had 8 points on 3-for-9 shooting.

San Antonio began the night in eighth place in the West – one-half game behind the Los Angeles Clippers, who were playing the Lakers.

Elsewhere, Kelly Oubre had 27 points and 13 rebounds, and the Phoenix Suns rallied from a 10-point fourth quarter deficit to beat the league-leading Milwaukee Bucks 114-105.

Devin Booker added 22 points and Deandre Ayton hit a key layup with 35 seconds to play that gave the league-worst Suns a four-point lead.

All-star Giannis Antetokounmpo had 21 points and 13 rebounds for the Bucks, who have lost two straight games for the first time this season. – Rappler.com