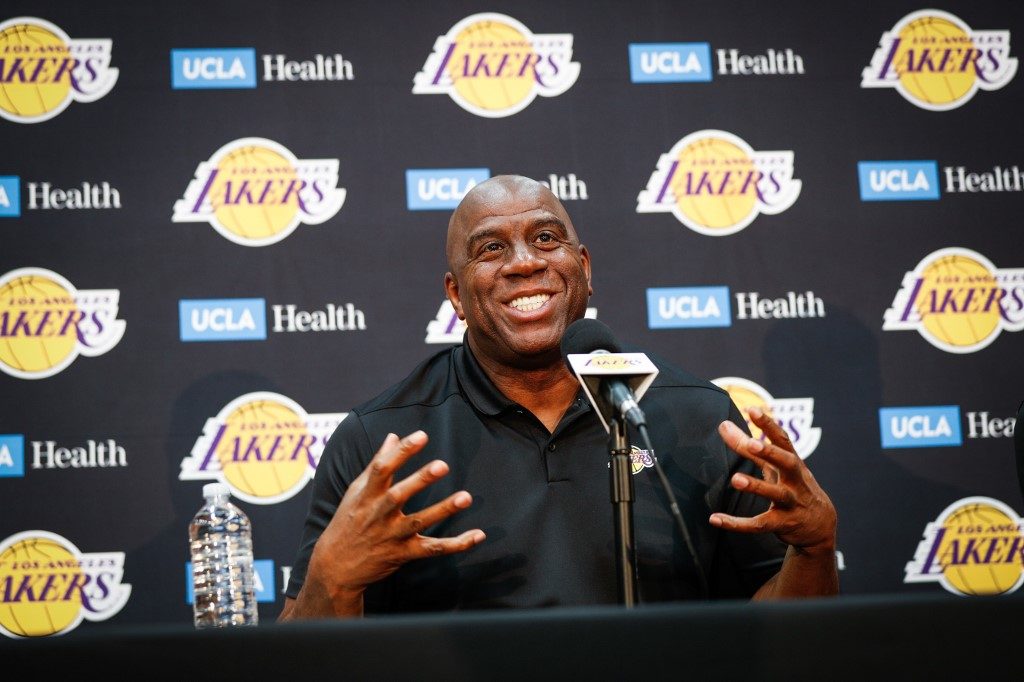 In a dramatic announcement which came shortly before the Lakers’ final game of the season, an emotional Johnson said he was stepping down after a two-year reign as president of basketball operations with the 16-time NBA champions.

The 59-year-old Lakers legend’s decision followed a disappointing campaign which saw the once-mighty Los Angeles franchise fail to make the playoffs for a sixth consecutive year.

“Today, I’m gonna step down as the president,” Johnson told reporters at an impromptu press conference.

Johnson had been saddled with the task of reviving the Lakers and played a pivotal role in persuading LeBron James to join the team last year in a blockbuster move.

However, the Lakers’ revival stalled this season when James was injured, triggering a slump which saw the team fall from playoff contention.

Magic Johnson has announced he is stepping down as Lakers' President of Basketball Operations. pic.twitter.com/a5Sk3rJMQh

Johnson also attracted criticism for an unsuccessful pursuit of New Orleans Pelicans star Anthony Davis, a move which was widely reported to have destabilized the Lakers locker room.

He told reporters he was stepping down in order to preserve his friendship with Lakers owner Jeanie Buss, describing her as “like a sister.”

The former Lakers star also revealed he had been wearied by the responsibilities of his position, saying he had not enjoyed the process of hiring and firing personnel.

“(Jeanie Buss) and I have such an amazing relationship,” Johnson said. “She gave me full power to do what I wanted to do, but I think that with her and I, I want to always preserve our relationship.

“I had more fun when I was able to be the big brother and the ambassador to everybody. I had more fun on the other side than on this side.”

The Lakers. meanwhile, paid tribute to Johnson in a brief statement.

“There is no greater Los Angeles Laker than Earvin Johnson,” the team said. “We are deeply grateful to Magic for all that he has done for our franchise, as a player, an ambassador and an executive.”

Johnson was widely expected to swing the axe on Lakers coach Luke Walton on Wednesday following their final game of the season at the Staples Center against Portland.

However, he hinted that Walton may now stay.

“Tomorrow I would have to affect someone’s livelihood and their life,” Johnson said, without referring to Walton directly.

“And I thought about that. And that’s not fun for me. That’s not who I am. I don’t want to put (Buss) in the middle of us.

Johnson, however, said he believed the Lakers were on the right track following the arrival of James.

“We’re halfway there with LeBron coming,” he said. “I think this summer we’ve got other stars coming in. This team is going to be in position to contend for championships.”

Johnson revealed that he had not even informed Buss of his resignation before announcing it to reporters at the Staples Center.

“She doesn’t know I’m standing here because I know I would be crying like a baby in front of her, even though I’m about to cry now,” Johnson said.

“But it’s the right thing to do, the right move to make,” Johnson said, adding that he had also grown tired of “the back-stabbing and the whispering” that had dogged the Lakers’ season.

“I didn’t like that,” he said. “I hope that after that, the Lakers can head in the right direction.”

Los Angeles Times sportswriter Bill Plaschke compared the sense of shock to when Johnson had announced to the world he had the HIV virus in 1991.

“I think the criticism hurt him, the responsibilities of the job weighed on him, and with his other businesses, it became too much. It was a great idea to have him his as president but I think it was too much for him. He couldn’t be himself.

“He didn’t want it anymore.” – Rappler.com