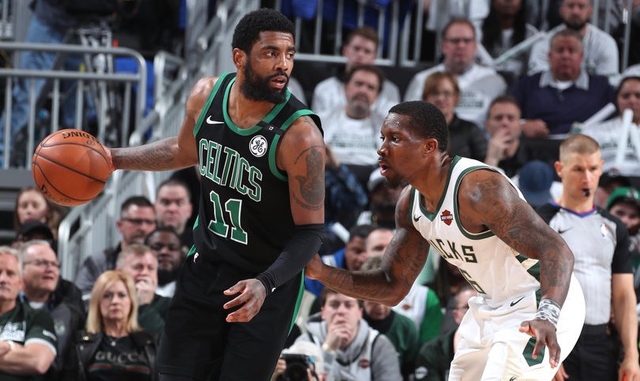 Meanwhile, Giannis Antetokounmpo was 2-10 when guarded by Al Horford and Aron Baynes. Giannis also shot just 4-15 in the paint. pic.twitter.com/wo7gQuQn1v

“We came out and made a statement. We guarded Giannis really tough. We stayed very physical with him,” Irving said.

“He’s so good around the rim, that mid-range area, we had to keep him out of there. I think we did a great job.”

Antetokounmpo led the Bucks with 22 points and grabbed 8 rebounds, but much of his production came late when Milwaukee was already in a 20-point hole.

The Celtics, seeded 4th in the Eastern Conference against the club with the NBA’s best record at 60-22, shot 54% against the league’s toughest defensive squad.

While the host Bucks made one successful run early in the 4th quarter, they never threatened to erase that lead as they had done with a 15-point deficit in the first half.

“Just coming out playing very aggressive, playing poised, understanding they are very tough to beat on their home floor,” Irving said when asked about the key to Boston’s success.

“It’s our preparation, our focus and being there for one another. This is the time you show why you go through the ups and downs of the regular season.”

The Bucks, the NBA’s third-best scoring club, shot only 34.8% for the game.

Antetokounmpo went 7-for-21 from the floor and was denied inside position by Boston’s varied defensive schemes.

The Greek star’s teammates could not step up and offset his lost production when asked by the Celtics, who dropped 2 of 3 regular-season meetings with Milwaukee.

Both teams were coming off first-round playoff sweeps. – Rappler.com