Magnolia clamps down on San Miguel for 2-1 finals lead 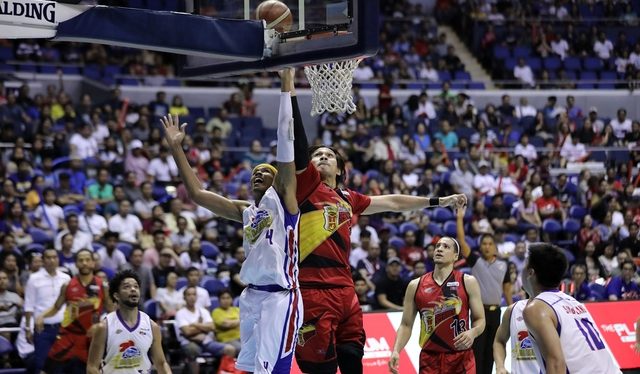 MANILA, Philippines – Magnolia put the shackles on San Miguel to regain the upper hand in the 2019 PBA Philippine Cup finals with an 86-82 Game 3 win at the Araneta Coliseum on Sunday, May 5.

The Hotshots’ formidable defense was in full display as they limited the Beermen to just 4 players in double figures – a far cry from 7 players in twin digits in Game 2 – to take a 2-1 lead in the best-of-seven affair.

Mark Barroca was at the forefront of the Magnolia attack after finishing with 22 points, 3 rebounds, and 3 assists, while Ian Sangalang and Rafi Reavis frolicked in the paint and contained San Miguel star June Mar Fajardo.

Sangalang had 17 points and 15 rebounds, while Reavis chalked up 16 points, 15 rebounds, and 2 steals as they took turns defending the reigning five-time PBA MVP, who shot 4-of-11 from the field and committed 6 turnovers.

While Fajardo still put up 17 points, 14 rebounds, and 3 blocks, he had to work hard for his every shot.

“We were more aggressive. We dictated the tempo, we dictated the defense and I think those have been the key,” said Hotshots head coach Chito Victolero.

Arwind Santos paced the Beermen with 19 points, 12 rebounds, and 3 blocks, while Terrence Romeo and Alex Cabagnot chipped in 15 and 11 points, respectively, in the losing effort.

Magnolia built an 82-76 lead late and seemed to have already sealed the deal until Cabagnot trimmed the San Miguel deficit to 3 points with a three-pointer with 17 seconds left.

But Barroca ensured there will be no meltdowns for the Hotshots as he knocked down 4 straight foul shots to mount a seven-point lead, an advantage enough to put Marcio Lassiter’s triple with 7 ticks left to waste.

Aside from putting a masterclass on defense by limiting San Miguel to a 32% shooting from the field and 23% from long distance, Magnolia also dominated the boards 71-46.