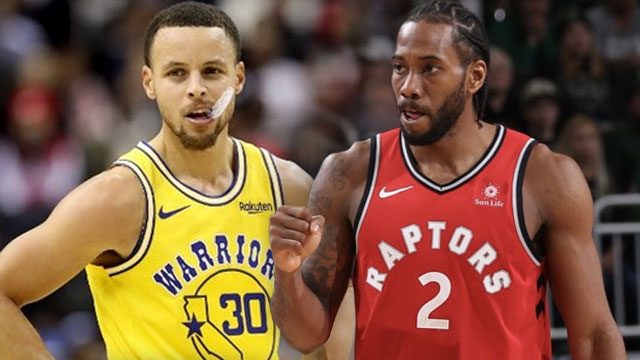 MANILA, Philippines – Another NBA season culminates as the Golden State Warriors and the Toronto Raptors clash for the grandest prize.

Toronto reached the NBA Finals for the first time since joining the league as an expansion franchise in 1995. The Raptors also became the league’s first finalist from outside the US.

Only 3 franchises in NBA history have completed a three-peat, namely, the Boston Celtics (8 straight), the Los Angeles Lakers (twice) and the Chicago Bulls (twice). The Warriors can join that elite group and become the first team to win 3 straight titles since the Lakers from 2000 to 2002.

If Golden State wins the series, it would earn its seventh championship and break a tie with Chicago for the third-most titles in NBA history. Boston holds the NBA record with 17 championships while Los Angeles trails with 16.

Steph Curry’s father, Dell, spent the last 3 seasons of his NBA career in Toronto. As a middle schooler in Toronto, Steph left coaches and teammates on the Queensway Christian Saints in awe with legendary shooting and scoring performances. Steph’s wife, Ayesha, was born and raised in Toronto. At 14, Ayesha moved to Charlotte, where she met Steph.

The last time Kawhi Leonard was in an NBA Finals back when he was still in San Antonio, he helped stopped Miami from completing a three-peat in 2014. Another three-peat-seeking team standings his way in Golden State. Will he be able to pull off the feat once more?

Toronto’s Nick Nurse is the first former NBA G League head coach to lead an NBA team to the Finals. Nurse, the only coach to win NBA G League championships with two franchises, has made the NBA Finals in his first season as an NBA head coach. Steve Kerr also did this with Golden State in 2015.

When Steve Kerr was hired as Golden State head coach in 2014, he reportedly was interested in adding Nick Nurse to his staff. Nurse ended up staying with Toronto to work under then-head coach Dwane Casey.

Golden State’s Alfonzo McKinnie made his NBA debut with Toronto last season, appearing in 14 games and spending most of the season starring with its NBA G League affiliate. Going undrafted in 2015 and beginning his career in Mexico and Luxembourg, an open tryout with the Windy City Bulls led to an NBA G League stint and ultimately an NBA spot.

Steph Curry needs to make two three-pointers to become the first player with 100 triples in the NBA Finals. He is already the career postseason leader with 447 treys.

Golden State will play its final 2 or 3 games at Oracle Arena in Oakland before moving to the Chase Center in San Francisco next season. – Rappler.com