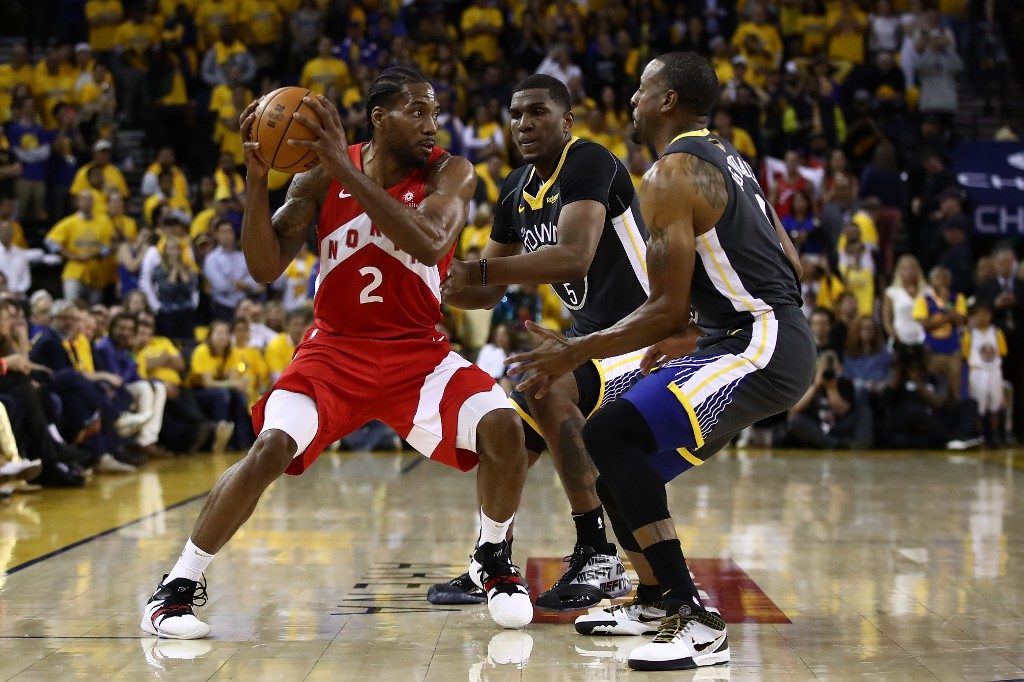 OAKLAND, USA – Kawhi Leonard hoisted the Toronto Raptors onto his back in the 3rd quarter of Game 4 of the NBA Finals against Golden State on Friday, June 7 (Saturday, June 8, Philippine time), and lifted them within one triumph of their first championship.

The 27-year-old playmaker with the cool-as-ice demeanor scored 36 points and grabbed 12 rebounds to power the Raptors over the defending champion Warriors 105-92 for a 3-1 lead in the best-of-seven series.

With the game poised on a knife’s edge, Leonard opened the 3rd quarter with back-to-back three-pointers to give the Raptors their first lead and finished with 17 points in the quarter while helping silence Golden State stars Stephen Curry and Klay Thompson.

“The key was pretty much playing defense,” Leonard said. “That second half we started to make some shots and just pretty much stayed in the game.”

Leonard, who was the 2014 NBA Finals Most Valuable Player in leading San Antonio to a title, was 11-of-22 from the floor, 5-of-9 from three-point range, and 9-of-9 from the free throw line to secure the victory.

“He’s playing great and he has lifted us a lot of times with big buckets or runs,” Raptors coach Nick Nurse said. “But more than anything, once we saw him early in the year… our team’s sense of who they thought they could become went up.”

Teammates realized they could become champions and now the Warriors know it all too well, even if Leonard lacks the flamboyant moves of LeBron James or injured Warriors star Kevin Durant. (READ: On brink of getting dethroned, Warriors still defiant)

“You got to give him his credit. He imposed his will on the game and all the other guys followed him,” Golden State’s Draymond Green said. “I’m not sure if it will ever look like those other guys, but he gets the job done.”

Curry was impressed at the way Leonard seized command.

“He played amazing,” Curry said. “He hit every big shot, momentum shot that in that 3rd quarter, it gave them the lead. And then kept the separation.”

Leonard’s low-key attitude has kept the Raptors calm when excitement beckons, such as being a game from the title.

“His demeanor has taken a big part of our team,” Raptors guard Kyle Lowry said. “We have some guys that are fiery and feisty, but we all just stay level headed and never get too up, never get too down. Kawhi definitely brought a lot to that.”

Raptors guard Fred VanVleet said there was nothing the Warriors could have done to stop Leonard from taking control early in the 3rd quarter with his three-pointers.

“There’s no defense for that. There are no schemes for that,” VanVleet said.

“That’s two big-boy shots that he came out of the half with, two back-to-back threes. And that just kind of let you know how we were going to approach the 3rd quarter and the rest of the half. It put us in good position.”

When the Warriors did try to stop Leonard, it opened plays for Serge Ibaka, who came off the bench to score 20 points.

“We know they would try to take Kawhi away, double him, so I just tried to play in the space.”

Ibaka had 12 points in the second half to keep Golden State at bay.

“He was great,” Nurse said. “Once he starts blocking a couple shots, the offense comes and the rebounding comes and even his jump shot seems to come.” – Rappler.com