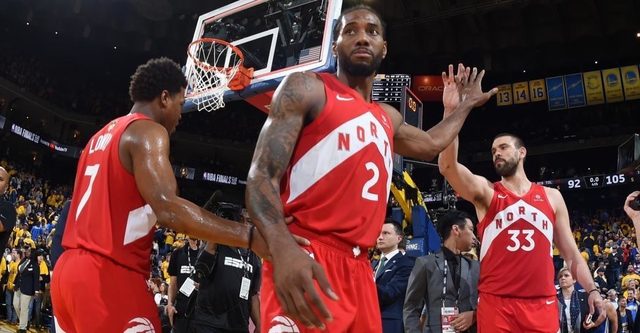 TORONTO, Canada – An NBA crown for the Toronto Raptors would bring basketball’s legacy full circle for Canada, celebrating its deep roots as birthplace of the sport’s inventor and site of the first NBA game.

The Raptors are a win away from becoming the first team from outside the United States to capture the throne after seizing a commanding 3-1 lead over defending champions Golden State Warriors.

Canada’s only NBA club has aroused passion across a nation known more for its love of ice hockey, outdoor watch parties at Toronto’s Jurassic Park inspiring others all over the country.

“You would need to be probably asleep or something if you didn’t realize that everybody is pretty excited,” Raptors coach Nick Nurse said.

Canada’s basketball heritage goes back to the beginning with James Naismith, the sport’s founder, being born to Scottish immigrants on a farm southwest of Ottawa in 1861.

Naismith developed basketball as a winter indoor activity while he was a physical education teacher at a Christian boys school in Springfield, Massachusetts, home of the Basketball Hall of Fame today.

He wrote the rule book at age 30, using peach baskets as the first shot targets, and before his death at age 78 in 1939 saw his sport played at the Olympics and as a US national college tournament.

“We also owe Dr. Naismith a lot in terms of his vision for global popularity,” NBA commissioner Adam Silver said.

“Shortly after he invented the game in 1891, he and other Christian missionaries brought the game overseas, to China, throughout Asia and to Europe.”

“It’s why in 1936 basketball became an Olympic sport and in essence the rest is history. Here we are today with very much a global sport, one of the most popular sports in the world.”

The first NBA game took place in Toronto in 1946, with the New York Knicks beating the Toronto Huskies, 68-66, before about 7,000 spectators at Maple Leaf Gardens.

It was a game where Ossie Schectman of the Knicks, a US son of Russian immigrants, sank the first basket in NBA history.

This year marked the first time the NBA Finals has been played outside the United States and the 13 Canadians on NBA rosters are the largest group from any nation beyond US borders.

“This is a homecoming of sorts for basketball in Canada,” Silver said. “It’s interesting it has in essence come full circle.”

It’s also the chance for a rare pro sports champion for Canada against American squads in the past quarter-century.

No Canadian team has won the NHL’s Stanley Cup, typically on display in Toronto’s Hockey Hall of Fame, since the 1993 Montreal Canadians. Five Canadian clubs have reached the finals since then only to lose.

And while Toronto FC, founded in 2007, captured the Major League Soccer crown in 2017, the city’s beloved NHL Maple Leafs haven’t won the Stanley Cup since 1967.

So it’s no wonder that while Formula One and a US Open golf tuneup event are contested in Canada this weekend, the Raptors are drawing record Canadian television viewership.

“Somebody was saying it’s more like a soccer, like how those fans are so passionate,” Raptors guard Fred VanVleet said.

“I just think we’ve got a really good fan base. It’s definitely unique in the NBA and I think our situation is unique where the fans are so thirsty for success and so hungry.”

“I just love the support. Us players definitely appreciate it. Our fans bring it every night.”

“You see them in many NBA cities and all over the world. Every time I go on vacation, I find about 100 people from Toronto.”

The Raptors have a global roster as well, including Cameroonian forward Pascal Siakam.

“It feels great because you always know that in Canada, and especially in Toronto, the diversity is incredible,” he said.

“You have people from different countries all together just cheering for one team. Having that support is amazing.” – Rappler.com