FAST FACTS: Canada and its love affair with basketball 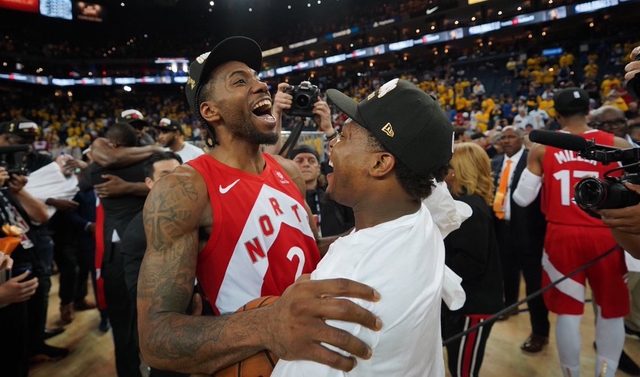 Facebook Twitter Copy URL
Copied
For a country where the sport's inventor was born and where the first NBA game was held, the Toronto Raptors capturing their first title is a significant moment

MANILA, Philippines – Basketball in Canada came full circle as the Toronto Raptors dethroned the Golden State Warriors to become the first team outside the United States to capture an NBA title.

For a country where the sport’s inventor was born and where the first league game was held, it was a significant moment to have its own team carve their place as the new kings of the NBA.

Here are some facts about Canada and its love affair with basketball:

While basketball is not the most popular sport in Canada, its inventor, James Naismith, hailed from the Great White North.

Naismith was born in Ontario, Canada before he migrated to the United States, where he invented basketball in 1891. He set 13 basic rules and first used peach baskets as goals.

Basketball debuted as a medal sport in the Olympics in 1936 and has since grown into one of the most widely played sports around the world.

In honor of his contributions to the sport, the Naismith Memorial Basketball of Fame was named after him as well as the Naismith Awards given to the best high school and collegiate players in America.

Before the Raptors, there were the Toronto Huskies.

The Huskies hosted the first Basketball Association of America (now the NBA) game on November 1, 1946 against the New York Knickerbockers at the Maple Leaf Garden.

Since basketball was relatively unknown in Canada and there was only one Canadian in the team, the Huskies resorted to gimmicks by giving free admission to anyone who is taller than the 6-foot-8 George Nostrand.

The game drew a sizeable crowd of 7,090, but the Huskies failed to protect their homecourt as the Knickerbockers hacked out a 68-66 win.

After missing the playoffs with a 22-38 record, the Huskies folded in 1947, leaving Canada without a team in the NBA.

But nearly 5 decades after, NBA basketball was brought back to Canada with the creation of the Raptors in 1995.

Canada is the most well-represented country in the NBA outside the United States with 13 Canadians seeing action in the 2018-2019 season.

Among those familiar Canadians are Jamal Murray of the Denver Nuggets, Kelly Olynyk of the Miami Heat, Tristan Thompson of the Cleveland Cavaliers, and Andrew Wiggins of the Minnesota Timberwolves.

But if there is one Canadian who has left his mark in the NBA, it would be Steve Nash.

Nash – born in Johannesburg, South Africa before his family moved to Regina, Canada – is considered one of the best NBA point guards of all-time after winning two MVP plums.

As the NBA Draft nears, there are a handful of Canadians expected to make the jump to the big leagues.

RJ Barrett of Duke University is a concensus top 5 pick and, as early as now, is touted to be a star in the future.

Other notable Canadians in several mock drafts are Brandon Clarke of Gonzaga University and Nickeil Alexander-Walker of Virginia Polytechnic Institute and State University.