Jun 20, 2019 2:46 PM PHT
Rappler.com
Facebook Twitter Copy URL
Copied
In each of the last 9 years, a college freshman has been selected first overall. Will that streak continue? 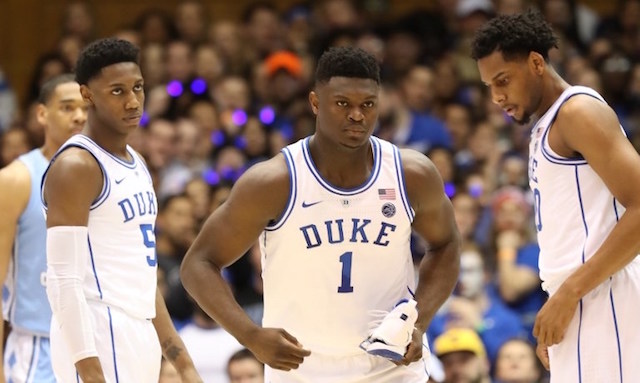 MANILA, Philippines – A crop of young but promising basketball players will enter the next stage of their careers in the 2019 NBA Rookie Draft on Thursday, June 20 (Friday, June 21, Philippine time).

Here are some fast facts before the draft:

– The New Orleans Pelicans are set to pick first for the second time in franchise history, and incidentally, it will come at the wake of the trade of their 2012 top draftee Anthony Davis to the Los Angeles Lakers.

Picking after the Pelicans are the Memphis Grizzlies, the New York Knicks, the Lakers, and the Cleveland Cavaliers.

– In each of the last 9 years, a college freshman has been selected first overall, with Blake Griffin being the last non-freshman to be nabbed No. 1.

Duke, which had Elton Brand (1999) and Kyrie Irving (2011) as first overall picks, can match that feat with Williamson and Barrett expected to land in the top 3.

– First overall picks are touted to be franchise-changers, but since the NBA Draft Lottery began in 1985, only 4 have won an NBA title with the team that drafted them.

– Barrett seeks to follow the footsteps of godfather Steve Nash, a two-time MVP and eight-time All-Star.

– Bol Bol of University of Oregon is the son 7-foot-7 big man Manute Bol, who played 10 seasons in the NBA.

– Hall of Famer Dikembe Mutombo, a four-time Defensive of the Year, has nephew Mfiondu Kabengele of Florida State University joining the draft.

– Los Angeles Clippers’ Shai Gilgeous-Alexander soon may either team up or go up against cousin and rookie hopeful Nickeil Alexander-Walker of Virginia Polytechnic Institute and State University.

Barrett (Canada), Sekou Doumbouya (France) of Limoges, Rui Hachimura (Japan) of Gonzaga University, Brandon Clarke (Canada) of Gonzaga, and Luka Samanic (Croatia) of Olimpija are among those who can add to that list.

– Hachimura is poised to become the first Japanese player selected in the draft.

Only two Japanese-born players have ever set foot in the NBA, namely, Yuta Tabuse and Yuta Watanabe. – Rappler.com