Retooled NorthPort preys on import-less Blackwater for share of lead 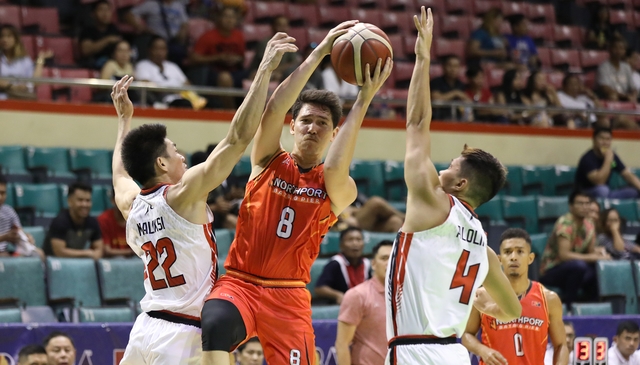 MANILA, Philippines – NorthPort capitalized on Blackwater’s all-Filipino lineup to breeze through a 127-99 victory in the 2019 PBA Commissioner’s Cup at the Cuneta Astrodome on Saturday, June 22.

Bolstered by 3 former Barangay Ginebra standouts they acquired after trading superstar Stanley Pringle, the Batang Pier took control from the get-go and never looked back to claim a share of the lead in the standings.

Clinching its fourth straight win and seventh overall in 8 games, NorthPort tied TNT at the top.

Kevin Ferrer immediately made an impact in his first game as a Batang Pier with 23 points, 6 assists, and 5 rebounds, while Sean Anthony came off the bench and put up 22 points, 11 rebounds, 4 assists, and 3 steals.

Taking over since the departure of Pringle, Robert Bolick flirted with a triple-double of 16 points, 10 assists, and 9 rebounds, while import Prince Ibeh chimed in 10 points, 13 rebounds, 2 steals and 2 blocks.

Jervy Cruz and Sol Mercado – who were also part of the blockbuster trade – contributed in the win that saw NorthPort lead by as many as 36 points.

Ray Parks chalked up 25 points, 11 rebounds, and 4 assists, but his efforts were not enough for an Elite squad that did not field import Jameel McKay.

Rabeh Al-Hussaini had 16 points and 6 rebounds, while Mike Digregrio scattered 10 points and 10 assists, for Blackwater, which slipped to 5-3. – Rappler.com