No excuses for Bowles after missing 14 free throws

Jun 23, 2019 9:39 PM PHT
Delfin Dioquino
Facebook Twitter Copy URL
Copied
Denzel Bowles compensates for his misfortunes at the line with a triple-double as Rain or Shine beats Columbian for the first time since 2017 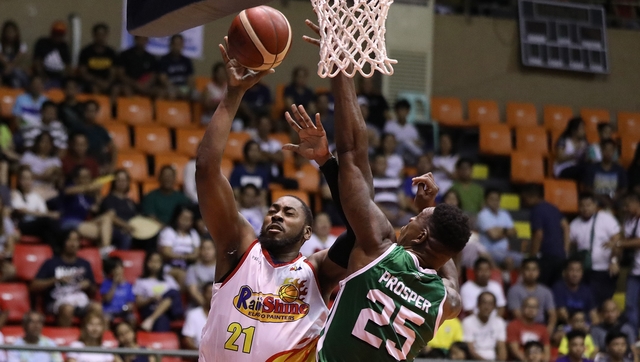 BATANGAS CITY, Philippines – Despite feeling unwell, Denzel Bowles didn’t offer any excuses after missing a bunch of free throws that nearly cost Rain or Shine its overtime win over Columbian.

The American import made only 7 of his 21 foul shots as the Elasto Painters barely escaped with an 88-86 overtime win over the Dyip in the 2019 PBA Commissioner’s Cup on Sunday, June 23.

“Yesterday because of the food, can’t really settle well so I didn’t really feel as well today. But that’s on me,” said Bowles, who was still as valuable in the triumph with 29 points, 14 rebounds, 10 assists, and 2 blocks.

“I can’t miss that many free throws. But the food here didn’t really settle well with me.”

With Rain or Shine up 79-78 late in regulation, Bowles had the chance to secure the victory for his side but missed half of his 4 charities – paving the way for Rashawn McCarthy to send the game to overtime with a triple.

Bowles was put on the line again late in the extra period with the Dyip holding a slim 86-85 advantage only to make 1 of his 4 freebies to shave the Elasto Painters’ deficit to a whisker.

Luckily for him, Beau Belga knotted the score at 86-86 before Rey Nambatac sank the game-winning layup as Rain or Shine toppled Columbian for the first time since 2017.

“I haven’t been here but this team has beaten us 4, 5 times in a row and we wanted to come here and break it today,” Bowles said.

Bowles and Rain or Shine (3-3) shoot for a second straight win against NLEX (1-6) at the Araneta Coliseum on Friday, June 28. – Rappler.com