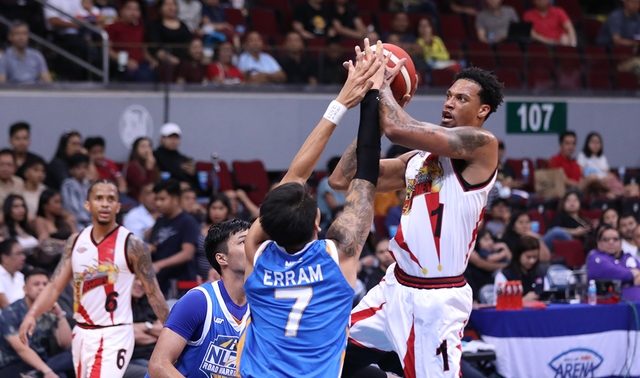 MANILA, Philippines – San Miguel reinvigorated its playoff bid behind new import Chris McCullough after surviving a late NLEX surge, 109-105, in the 2019 PBA Commissioner’s Cup at the Mall of Asia Arena on Friday, July 5.

Replacing former Best Import Charles Rhodes, McCullough did not disappoint in his league debut as he exploded for 47 points, 10 rebounds, and 2 steals to lead the Beermen to their third win in 8 games.

McCullough, who played for the Brooklyn Nets and the Washington Wizards in the NBA, caught fire for 23 points in the 3rd quarter as San Miguel enjoyed a lead as large as 28 points before fending off an inspired comeback from its foes.

The Road Warriors held a slim 57-56 advantage early in the 3rd before McCullough and Marcio Lassiter combined for 7 three-pointers in a blistering 32-7 run to give the Beermen an 88-66 lead.

Christian Standhardinger, who finished with 12 points and 7 rebounds, then beat the buzzer entering the final frame as San Miguel stretched its lead to 97-69 – its biggest of the game.

NLEX, though, did not waver and managed to shave its deficit to 10 points with less than two minutes remaining off an Olu Ashaolu and-one, 99-109.

However, the Road Warriors failed to score in nearly one and a half minutes as the Beermen held on to the victory.

Ashaolu paced NLEX, which slipped to 2-8, with 31 points and 15 rebounds, while Juami Tiongson chimed in 14 points and 6 assists.