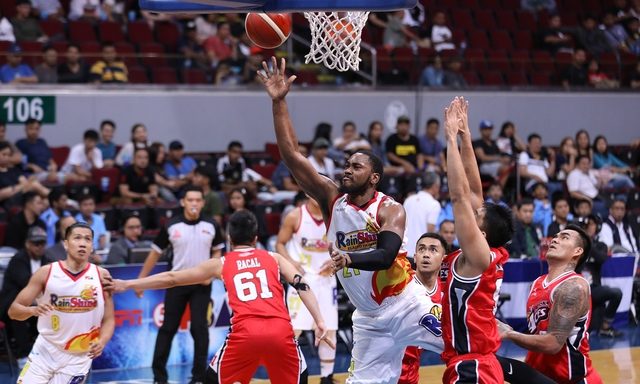 MANILA, Philippines – Denzel Bowles saw action for only the first two quarters but Rain or Shine still hacked out an 86-84 win over Alaska in the 2019 PBA Commissioner’s Cup at the Mall of Asia Arena on Saturday, July 6.

The former Best Import exited with 4 minutes left in first half after sustaining a knee injury and was immediately rushed to the hospital to be checked, leaving the Elasto Painters to play with an all-Filipino lineup.

But Rain or Shine took on the challenge behind veterans Mark Borboran and Beau Belga and young guns Javee Mocon, Rey Nambatac, and Ed Daquioag en route to capturing its fourth win in 9 outings.

Borboran finished with 11 points, Mocon chalked up 11 points, 6 rebounds, and 4 assists, while Nambatac chipped in 10 points, 4 rebounds, and 2 steals as the Elasto Painters dealt the Aces their fourth straight loss.

It was Daquiaog, though, who delivered the biggest shot of the game after sinking a pull-up three-pointer that gave his side an 84-78 lead with less than 40 seconds remaining.

The Aces managed to inch within 3 points off a Chris Banchero triple, but ultimately failed to knot the score after Simon Enciso muffed a fallaway trey and import Diamon Simpson missed back-to-back point blank shots.

Despite his abrupt exit, Bowles still had a team-high 16 points to go along with 4 rebounds, while Belga rose to the occasion with 6 points, 7 rebounds, 5 assists, and 2 blocks in the win.

Simpson paced Alaska, which fell to 4-6, with 22 points, 23 rebounds, 5 assists, and 2 blocks, while Banchero contributed 24 points and 9 assists.