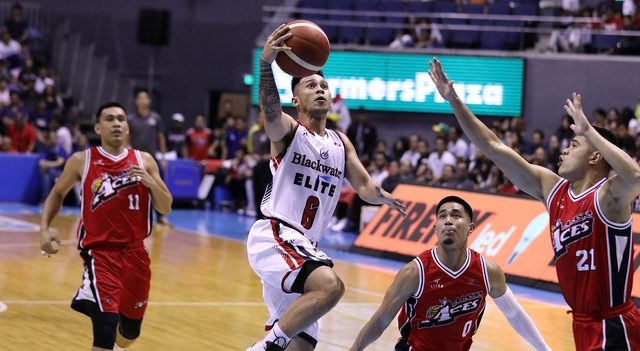 Facebook Twitter Copy URL
Copied
Ray Parks finishes with a near triple-double, while bench guys Roi Sumang and Rabeh Al-Hussaini come up clutch for the Elite

MANILA, Philippines – Blackwater secured the No. 3 seed in the quarterfinals and denied Alaska a playoff berth with a 112-104 win in the 2019 PBA Commissioner’s Cup at the Araneta Coliseum on Sunday, July 14.

Ray Parks finished with a near triple-double of 25 points, 10 rebounds, 8 assists, and 3 steals as the Elite pulled away late to end the elimination round with a 7-4 record.

Bench guys Roi Sumang and Rabeh Al-Hussaini also rose to the occasion down the stretch for Blackwater, hitting key baskets en route to chalking up 18 and 15 points, respectively.

The Aces were within striking distance with under two minutes left, 104-106, until Al-Hussaini beat the shot clock with a three-pointer and Sumang hit a tough pullup jumper to give the Elite a seven-point advantage.

Alaska neven scored since then with Javee Casio and Chris Banchero missing their three-point tries in the final minute.

Mac Belo added 13 points and Allein Maliksi chipped in 12 points off the bench for Blackwater, while import Staphon Blair added 14 points, 10 rebounds, and 4 blocks in the victory.

Diamon Simpson fronted the Aces’ attack with 24 points, 16 rebounds, 8 assists, and 2 blocks, but not even his all-around effort was enough for their side to clinch the last quarterfinals seat.

Despite falling to 4-7, Alaska can still advance to the next round as it is already assured of a playoff for the final quarterfinal berth.

Banchero had 18 points, while Vic Manuel and Sonny Thoss delivered 15 points apiece in the losing cause.