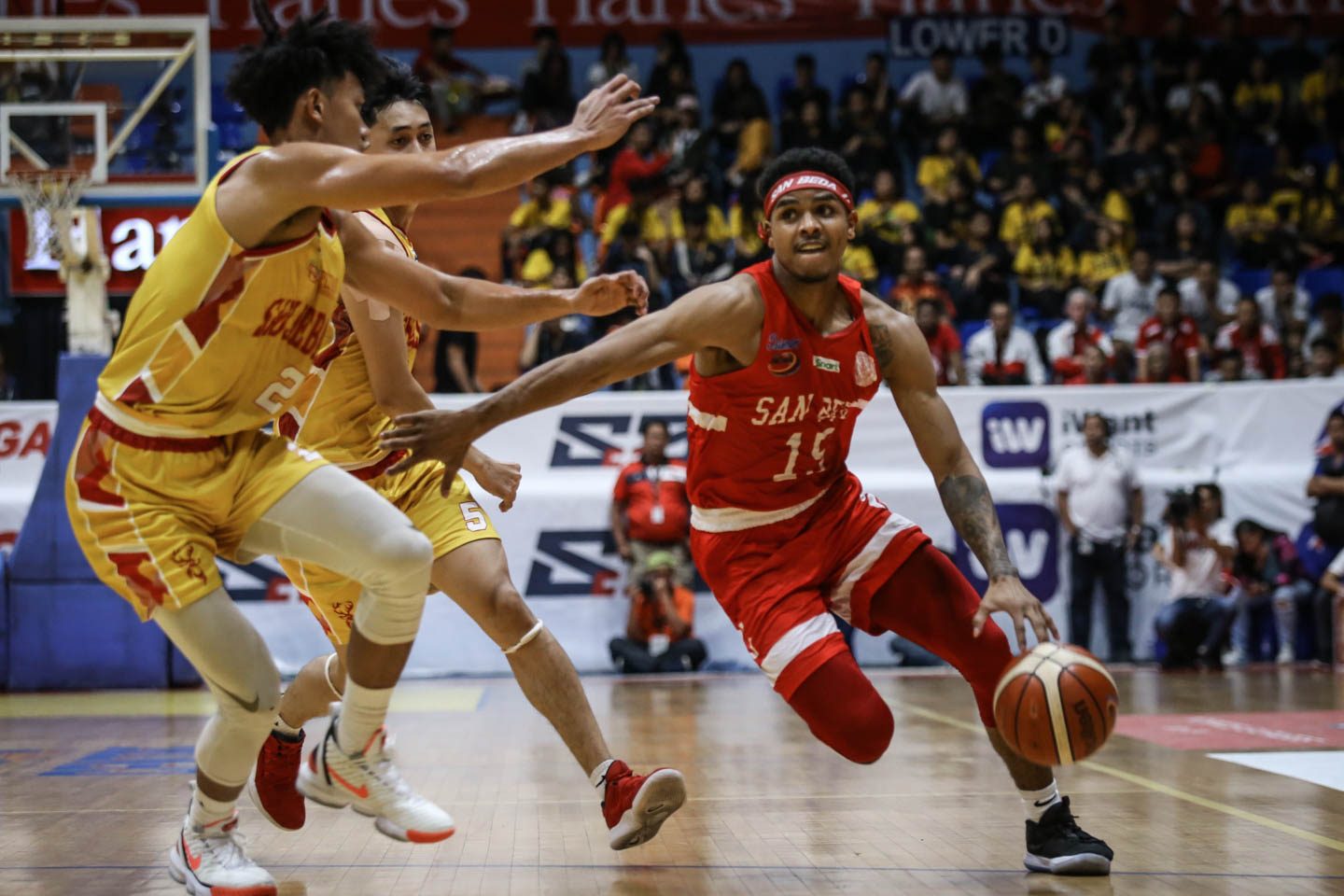 MANILA, Philippines – The San Beda Red Lions continued their undefeated run in the NCAA Season 95 with a 73-59 rout of the San Sebastian Golden Stags at the FilOil Flying V Centre on Friday, July 26.

Off a 48-50 deficit at the 6:55 mark of the 4th, the defending three-peat champions seized away momentum from the Stags with a 12-0 run, highlighted by a pair of threes from Clint Doliguez and Calvin Oftana.

San Sebastian never recovered from there as Evan Nelle punctuated the blazing quarter with two-straight threes in the final minute of regulation.

Allyn Bulanadi led all scorers with 15 points while Arjan Dela Cruz added 12 markers off a 4-of-4 shooting from downtown as the Stags dropped their second straight game. After going scoreless against Lyceum, RK Ilagan still only mustered 3 points on a 1-of-8 clip this game after getting benched for the entire 1st quarter. The Lyceum Pirates also joined the blowout party with a 95-77 drubbing of the JRU Heavy Bombers.

The two-time NCAA finalists established full control midway through the 2nd quarter after a Ralph Tansingco layup capped off a huge 25-6 run.

Things then went from bad to worse for the Bombers as head coach Louie Gonzalez was ejected with 8:37 left in the 3rd frame after an extended argument with the referees. From there, the Pirates just continued their smooth sailing, getting the lead as high as 28, 80-52, after a wild Enzo Navarro triple at the 8:38 mark of the 4th.

With the game all but wrapped up against JRU’s favor, sophomore guard Agem Miranda still got himself tossed after punching Lyceum reserve Beirn Laurente with 3:13 left in regulation.

Because of their ejections, both Gonzalez and Miranda will not suit up in their home game next Thursday, August 1, against the visiting EAC Generals.

Cameroonian center Mike Nzeusseu led Lyceum with 13 points and 8 rebounds in just 16 minutes on the floor. Three other Pirates scored in double-figures as they won their third straight game.

On the other end, John Amores led all scorers with 23 points as JRU saw its two-game winning streak emphatically snapped by Lyceum. To end the day’s triple-header, the Arellano Chiefs asserted their dominance against the EAC Generals and finally claimed their first win of the season, 86-77.

Graduating guard Kent Salado helped secure the breakthrough win with 24 points, 18 coming in the 1st half, and a game-high 11 assists.

The Chiefs displayed their renewed energy and dictated the pace from tip-off. Arellano managed to make the most of every possession, closing the opening frame with a 14-point cushion, 29-15.

This lead came in handy for the Chiefs in the 2nd quarter as the EAC Generals started the period with an 8-0 run cutting the lead down to single digits. However, Arellano stayed composed and Salado’s crucial back-to-back triples helped the Chiefs maintain the lead.

Coming into the 3rd frame, the Chiefs suffered early foul troubles keeping them in the penalty situation for more than 7 minutes. However, Arellano continued their aggressive play like they did from the start.

While the Generals caught up within single-digits in the waning seconds of the contest, it was too little, too late for them as Arellano clinched their first win of the season. Meanwhile, the Generals dropped to 9th with a 1-4 card, just above the winless Mapua Cardinals.