Aug 14, 2019 9:37 PM PHT
Delfin Dioquino
Facebook Twitter Copy URL
Copied
Chris McCullough delivers the goods in the closing stretch to help the Beermen storm back from 16 points down in the final 10 minutes 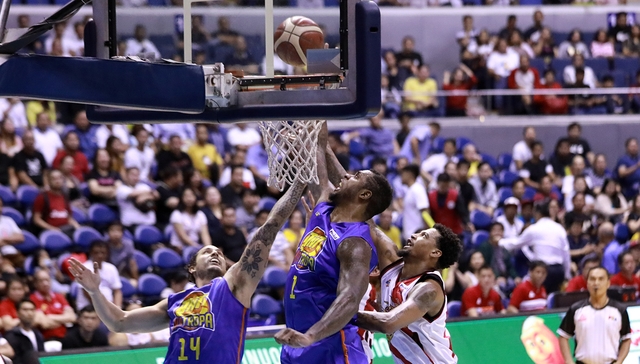 MANILA, Philippines – San Miguel moved on the cusp of capturing the 2019 PBA Commissioner’s Cup crown with a rousing 99-94 comeback win over TNT in Game 5 at the Araneta Coliseum on Wednesday, August 14.

Chris McCullough, who had 35 points, 22 rebounds, 4 assists, and 3 steals, delivered the goods in the closing stretch as the Beermen stormed back from 16 points down in the final quarter to take a 3-2 lead in the best-of-seven duel.

The KaTropa were still up 94-93 with a minute left before McCullough unloaded 4 straight points – an acrobatic layup over Terrence Jones and two free throws – to give his side a 97-94 advantage with 13 seconds remaining.

Jayson Castro missed a potential game-tying triple for TNT in the ensuing play as Chris Ross secured the victory for San Miguel by sinking both of his foul shots.

Playing all 48 minutes, McCullough did not show signs of fatigue when it mattered most after he erupted for 19 points in the payoff period to rally the Beermen, who trailed 69-85 at the 10:39 mark.

He scored 5 points in an 7-0 spurt that put San Miguel within one possession, 87-90, and knocked down a pair of freebies that shaved their deficit to 93-94 with less than two minutes left.

That coupled with multiple defensive stops by Christian Standhardinger on Jones, who was limited to a measly 3 points in the last frame, down the stretch proved to be the key for the Beermen to take the series lead for the first time.

Terrence Romeo chalked up 22 points off 4 three-pointers to go with 5 rebounds, June Mar Fajardo added 16 points, 11 rebounds, and 2 steals, while Von Pessumal chipped in 9 points and 2 steals for the Beermen.

Standhardinger did not have much of an impact on offense with 4 points and 3 rebounds, but compensated for it by forcing Jones to commit 2 turnovers and 3 missed shots in the final two minutes.

Jones still finished with 35 points, 17 rebounds, 8 assists, 4 blocks, and 2 steals, Castro had 18 points, 5 rebounds, and 4 assists, while Troy Rosario chimed in 16 points and 8 rebounds in the heartbreaking loss.