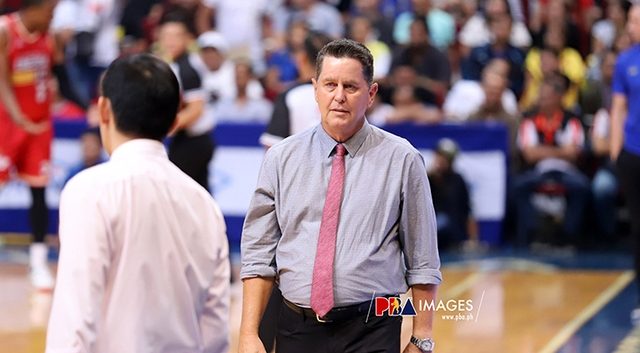 Facebook Twitter Copy URL
Copied
In the SEA Games, Tim Cone will carry the task of leading the Philippines to a 13th straight gold medal and 18th overall

MANILA, Philippines – Tim Cone will immediately buckle down to work as he takes over the coaching reins of Gilas Pilipinas for the upcoming Southeast Asian Games, which the country will host later this year.

Reported to be at the top of the Samahang Basketbol ng Pilipinas’ (SBP) wish list to fill in the void left by former national team mentor Yeng Guiao, Cone was officially named head coach on Monday, September 23.

“Even though my appointment is just a stopgap measure and a short-term commitment, I am incredibly honored and proud to be selected to coach in the SEA Games,” Cone said after the announcement.

Cone comes full circle after more than two decades, as he guided the Philippines to a bronze-medal finish in the 1998 Asian Games.

In the SEA Games, the Barangay Ginebra tactician – the winningest coach in PBA history with 21 championships – will carry the task of leading the national crew to a 13th straight gold medal and 18th overall.

“I will sit down with the SBP over the next couple of days and come up with a plan of attack in terms of preparation, and we’re hoping by the end of the week we’ll have a pool of players working together at full force,” Cone said.

Although the SBP clarified the appointment is only for the SEA Games “for now,” that did not dampen the mood for Cone.

“I’m extremely excited to get going,” he added. – Rappler.com