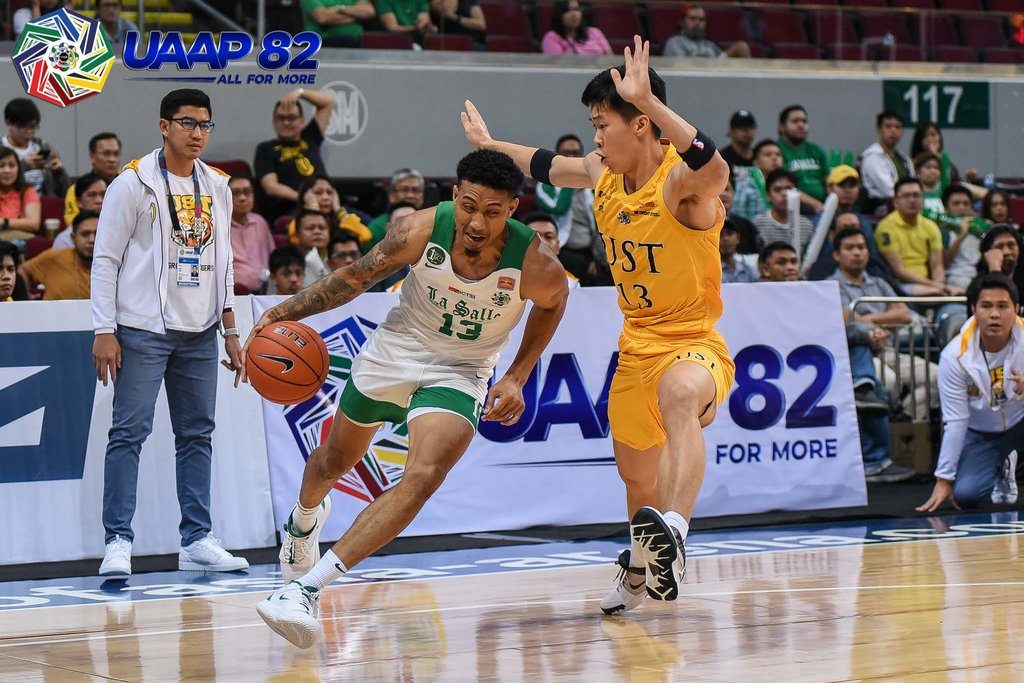 Facebook Twitter Copy URL
Copied
Smarting from a recent heartbreak, the La Salle Green Archers go all out this time to dominate the UST Tigers

MANILA, Philippines – The La Salle Green Archers avoided grazing the UAAP Season 82 cellar with a 92-77 win over the UST Growling Tigers in men’s basketball at the Mall of Asia Arena on Saturday, September 28.

With the win, the Archers not only ended the first round with a 3-4 slate but also made up for a recent heartbreak where a fourth-quarter collapse and a costly end-game error led to a one-point loss to the UP Fighting Maroons, 71-72.

La Salle guard Encho Serrano pumped in a career-high 29 points on a 13-of-22 shooting clip and grabbed 5 rebounds to lift the Archers, who pinned a third loss on the Tigers.

“We were due to win,” said La Salle coach Gian Nazario. “The way the team has been practicing, it showed in today’s game.”

Aljun Melecio also went 6-of-9 from beyond the arc to tally 26 points and 5 assists, while Jamie Malonzo finished just a rebound-shy of a double-double with 13 points and 9 boards for La Salle.

Thanks to their deep back court, the Archers established a 10-point lead at the half, 42-32, despite Brent Paraiso’s early 15-point eruption. The former La Salle role player wound up finishing with a career-high 22 points.

Despite UST’s attempts at a comeback off the production of Paraiso and Rhenz Abando, it was Serrano who held the fort down in the 3rd with his bullying layups down low.

“We’re just talking about it – that when our team follows the game plan, the results will follow after that,” said Nazario. “We played well against Adamson, we were 8 seconds unlucky versus UP, but this time around, we made sure we’ll finish the game well.”

La Salle blew the game wide open midway through the payoff period with a 13-5 run capped by a Malonzo two-handed jam for an 80-63 advantage.

Melecio then sealed the deal with back-to-back triples for an 88-71 gap in the final two minutes of regulation.